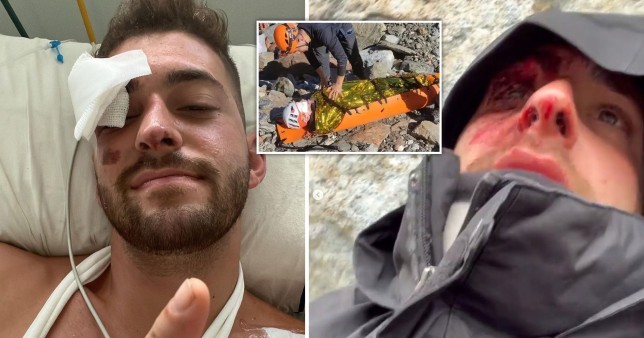 A badly injured tourist recorded a video urging rescuers to contact his mother as he was convinced he was going to die on a remote glacier.

Eitan Shaked, 23, fell 30 feet while trekking at the Ojo del Albino glacier near the city of Ushuaia, known as the ‘end of the world’ due to its position on the southern most tip of Argentina.

The Israeli somehow survived in the cold for more than 24 hours despite breaking his pelvis and elbow.

He was on the verge of hypothermia when he was saved after managing to get out a message on his phone, which was picked up by a local rescue service.

Before he was rescued Eitan recorded a video, which he later shared on his Instagram page.

It shows him having apparently given up hope, with his face bloodied, and asking rescuers in English to contact his mother and tell her what happened.

He wrote alongside the footage: ‘Those who know me know that I don’t like to philosophize on social networks but this time, unfortunately, I have no choice but to write a little more. Last Wednesday I went for a walk in Ushuaia and fell about 10 metres.

‘I waited for rescue for a day, disconnected, without taking food or water and also with my pelvis and elbow broken. When they found me I was on the verge of death from hypothermia.’

After being rescued, Eitan was taken to hospital in Ushuaia, where he was treated for fractures to his pelvis and one of his arms.

He has admitted that he ‘doesn’t understand’ how he didn’t die on the glacier, which is widely considered to be one of the coldest places on earth.

Eitan also shared footage which showed a rescue helicopter reaching his position and him being placed on a stretcher and wrapped in a gold blanket.

Firefighter Federico De La Torre told local media that the 23-year-old adventurer was lucky because at the time of the accident, ‘the day was very beautiful and the night was not as cold as it usually is.’

Eitan thanked his rescuers on social media and praised the medical personnel who are still treating him at the Ushuaia Regional Hospital.

He added: ‘It’s always fun to rediscover how good the human race is. I’m not proud of what happened to me, but I’m glad it ended up that way.

‘After I got sick with cancer a few years ago, dealing with death up close for the second time in my life is not an easy thing.

‘Take care of yourself and be responsible. A piece of advice for all travelers: Fly on your trip, but try not to fly off your trip.’