A man under the influence of alcohol and methamphetamine took an Australian family and three Thai workers hostage at a restaurant on popular Railey Beach in Krabi on Tuesday evening.

It took some 50 policemen about 45 minutes to end the hostage drama, which began at 7pm at the beach in Tambon Ao Nang in Krabi’s Muang district.

Police surrounded the restaurant and arranged a phone call between Ekkapoj and his father, after which the assailant laid down his gun and freed the hostages.

According to Phisanu, Ekkapoj arrived at Railey beach on Monday to visit a friend. On the following day, he drank and took meth pills and became paranoid that he would be harmed.

He was seen walking and waving his gun around in public while appearing agitated.

He then walked into a shop and upstairs to the second floor, where he forced three Thais and a family of three Australians to lie face-down on the floor. He then forced the six into the shop workers’ bedroom on the premises and locked them inside. At one point, Ekkapoj fired four times into the air, causing panic among tourists but no injuries.

When police arrived to surround the shop, an agitated Ekkapoj began waving his gun around.

When he eventually freed the hostages and surrendered, police took him to the Ao Nang police station and charged him with carrying and firing a firearm in public place and unlawfully detaining others against their will. 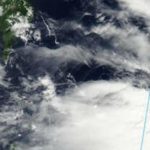