Home » Thailand ask Lao to help get Thais back home Thailand is asking Lao authorities to help rescue a number of Thais who were allegedly duped into working for scammers in the neighbouring country.

Chiang Rai governor Phassakorn Boonyalak said on Saturday that he has asked for help from the governor of the Lao province of Bokeo where the Thais are based, and the Lao governor has promised assistance.

He said he had also informed the Interior Ministry and the Foreign Affairs Ministry of the matter.

The issue was brought to his attention by NGOs and the media, Mr Phassakorn told the Bangkok Post.

However, no joint committee between the two countries has been set up to look into the case, he said.

Mr Phassakorn also said that some of the Thais entered Laos illegally via natural corridors.

“We are not sure whether the Thais were actually duped or whether they sneaked across the border illegally.

“When problems arose, they contacted their relatives or NGOs to seek help from Thai authorities,” he said, adding there are only two Thais seeking help so far.ad

“But we know that there are traffickers who smuggled some of them into [Laos]. Security authorities are tracking down these traffickers.”

According to sources, several Thais sneaked across the Mekong River to work in the Golden Triangle Special Economic Zone (SEZ) in Laos’ Bokeo province earlier this year only to find out later that they were duped into working for a skimming gang there.

Late last month, some 15 Thais aged between 20 and 30 decided to contact their relatives back home to help seek an immediate return to Thailand, sources said.

Eleven of them later managed to escape and return safely to Thailand and recounted their ordeals, but four still remain there, the sources said.

The returnees said they were forced to work 15 hours a day and their living quarters were enclosed with electrical wires to prevent them from escaping, the sources said.

A 29-year-old woman, one of the victims, said several of the victims had well-paid jobs in Thailand, such as guiding tours and managing restaurants, before Covid-19 hit the country.

They lost their jobs due to economic problems caused by the pandemic, and labour brokers offered them work as administrators for an online casino operation located in the SEZ, the woman said.

They were offered 30,000 baht per month under a six-month contract, but when they got there, instead of working as admins, they were forced to clone profiles of Facebook and Instagram users for scams, she said.

Another victim said the gang threatened to sell them to other gangs for failing to scam people out of their money. 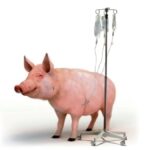 Are pigs the future of organ transplants? 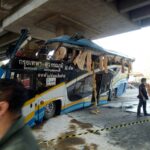 Five killed and 30 others injured in bus accident