Home » Five killed and 30 others injured in bus accident At least five passengers were killed and 30 others were injured when the air-conditioned bus, operated by Thailand’s the state-run Transport Company in which they were travelling, crashed into a supporting pillar of as flyover in front of a shopping mall in Muang district of the central province of Saraburi this afternoon (Saturday).

Police in Saraburi said that the bus, which began its journey in the north-eastern province of Roi-et, was heading for Bangkok when the accident occurred.

Police suspect that the driver might have fallen asleep at the wheel, but the driver denied this and argued that one of the tyres might have burst, causing him to lose control of the vehicle.

All the injured passengers have been taken to various hospitals in the province treatment.

The Transport Company later said that it has instructed the Saraburi bus terminal master to assist all the passengers involved in the accident. Thailand ask Lao to help get Thais back home 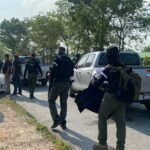