“Spoiled” Thai man who moved to the US when he was 9 years old is now looking to sue the newly elected president, Donald Trump.

New was 9 when he and his family emigrated from Bangkok to California in 1999. It was two years after the Tom Yum Goong economic crisis began, and his parents’ real estate and tourism businesses were going bankrupt.

Born Jirayut Latthivongskorn in 1989 in Bangkok, the self-described “spoiled” youngest child left behind his privileged, middle-class life of private schools. In California, his parents worked long hours at Thai restaurants. By the time New reached high school, he had no legal identification needed to find employment. So he waited tables, mopped floors and washed dishes to help his parents with expenses.

“I lived completely different lives,” New said of the times before and after 1999.

On Monday, the med student joined five other so-called Dreamers in filing a federal lawsuit against US President Donald Trump over his decision to terminate a program that shielded them and roughly 800,000 other eligible undocumented immigrants who arrived as children from deportation. While the order did not grant them citizenship, it authorized two-year, renewable work permits for those who passed stringent vetting.

A lawyer, law student, two teachers and a doctoral candidate round out the other five plaintiffs, all of whom hail from California.

On Sept. 5, Trump ordered an end to the Deferred Action for Childhood Arrivals, or DACA, a policy initiated in 2012 by his predecessor, Barack Obama, after the U.S. Congress was unable to pass immigration reform legislation.

The lawsuit was filed in San Francisco federal court and demands the government “honor its promises” and cancel the repeal because revoking earlier guarantees would violate due process.

“The decision to end the DACA program is a broken promise and an unprecedented violation of the constitutional rights of Plaintiffs and other young people who relied on the federal government to honor that promise,” the lawsuit, filed in San Francisco reads.

Trump, who was elected on an anti-immigrant platform but expressed compassion for those who’ve become known as “Dreamers,” delayed the repeal for six months, saying the Congress should take action in that time.

Before Obama enacted DACA by executive order in 2012 – a move criticized by his opponents as an overreach of power – New had a hard time keeping his immigration status a secret.

Without a social security number or green card, he had no access to financial aid. He could only work cash-in-hand jobs and couldn’t get a driver’s license.

New remembers how he often make excuses to his friends, such as saying he would be a terrible driver. Once he was robbed at gunpoint near his campus but didn’t go to police because he feared deportation.

During his junior year in high school, New’s mother had to go through a major operation. It was after taking responsibility for her hospital care, being present for doctor visits and helping interpret her Thai, that New decided he wanted to be a doctor.

He was accepted by several universities and offered scholarships only to then be rejected because of his legal status when they asked for documentation.

“Let me know when your status changes,” New said he was told more than once.

With his family’s support and private scholarships, New obtained an undergraduate degree in biology from UC Berkeley. That was one month before Obama announced DACA. New applied for the program and was granted DACA status in 2013. As required for work authorization, he went through the renewal process in 2014 and again in 2016.

“DACA is a life-changer,” New said, adding that he aims to be a primary care doctor serving “underserved and unprivileged” communities.

New is now a fourth-year student in medicine at UC San Francisco and also in a master’s program in public health at Harvard University, which has lent its support.

“We stand behind Mr. Latthivongskorn without reservation,” Dean Michelle A. Williams of the Harvard T.H. Chan School of Public Health said in a statement. “As a dedicated student of medicine and public health, Mr. Latthivongskorn offers an outstanding example of the value that immigrants — both documented and undocumented — provide to communities across this nation.”

That DACA recipients tend to be high-achievers is evident in Pre-Health Dreamers, a group New helped start after the program was enacted. It now counts more than 800 undocumented students who are pursuing health and science professions.

Earlier this year, New was listed on Forbes’ 30 under 30′ in education, where he was praised for being “on the frontline of getting undocumented students into medical professions and on the path to becoming physicians and healthcare professionals.”

What if the lawsuit and other measures fail to restore his protected status? Could he imagine being deported to live in Thailand now? New paused briefly before replying: “Yes, and no.”

“If I move back to Thailand, I’m lucky that I have the option to. Some immigrants can’t go back to their birth countries. if they go back they might … die because of war and so on.”

“More than half of my life I’ve lived here,” New said. “My friends, family and work are here. This is home for me.” 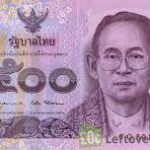 Beaches in Phuket shut to the public until further notice