To most, it looks pretty obvious that the 500 Baht banknote is fake, but a taxi driver in Phuket was not aware until later on, after the paying customer had left.

The original note was in fact a 50 Baht note, but had been badly washed with some kind of purple dye, and an extra zero glued, yes glued, onto the end.

How would anyone one fall for that, you ask, especially a Thai.

Well, a Phuket taxi driver manager posted a warning for people to beware of fake banknotes after a tourist got away with paying with a THB50 (USD1.50) banknote washed with a purple tint and with extra zeros literally glued on it to present it as a THB500 (USD15) note.

However, even in black-and-white, the design of the bill should be obvious to anyone who regularly uses Thai cash.

A taxi company manager, who did not want to be named, posted photos of the note on Facebook Tuesday, saying “Staff at my office showed me this. The money was from a taxi driver who was handed this from a tourist on Monday night.

We are not sure if it was the tourist created this banknote or if someone else handed it to (him/her) without realizing it.”

The poster said he was sharing to warn other people to look carefully at the money they are given. 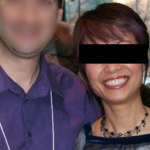