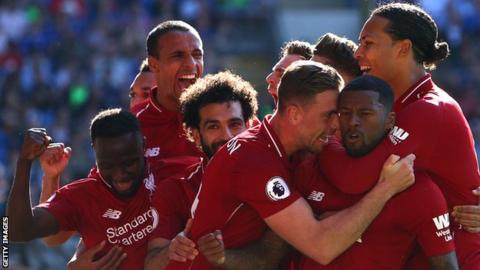 Liverpool Back On Top Of The Pile In Their Play and Pray Season. But Is Their Name On Trophy? Match Highlights. Player Ratings. Comments, And Stats.

As City, continue to cruise to victory with early goals to relax their fans, Liverpool win another way. Sometimes late, but they do it and it’s never ugly. Plus they have that special X factor known as ‘Their Name’s On The Trophy.’  Against Cardiff Sean Morrison provided that moment again in the 64th minute.

Against Liverpool, with the score at 1-0 and the Reds struggling to put the game to bed, Joel Bennett swung over an in-swinging corner from Liverpool’s left. At the back post Morrison, in the six-yard box, shrugged off the attentions of Sadio Mané and stopped low to head home an easy chance. He couldn’t miss. He had to score. But he stopped too low and the ball harmlessly bounced off the back of his neck and out for a goal kick.

Jürgen Klopp started with James Milner on the bench and when Fabino, replaced Naby Keita after 71 minutes, it left the impression that Milner wouldn’t feature. Ten minutes later Milner put the game to bed.

Fabino only lasted four minutes as he came off worse in an aerial clash with Cardiff’s substitute Kenneth Zohore who entered the action four minutes before him. Fabino looked groggy and Liverpool were not taking any chances.

Mo Salah won the penalty, his 5th of the season and only Wilfried Zaha has more with six, when he tangled with Morrison. Neil Warnock called it soft but Morrison’s arms were all over Salah and it looked like a wrestling match with the incredible hulk! Salah had to fall and he did. Milner stepped up and sent the keeper the wrong way.

Liverpool ‘s best chance of the game fell to Roberto Firmino in the 22nd minute after he’d been put through by Mané. Firmino fired high and wide. Other chances went begging and as Liverpool pressed it looked like it might be one of those days until Trent Alexander-Arnold took a corner on Liverpool ‘s right. Instead of a high ball, searching for the head of someone like Virgil van Dijk, the ball came in low and bobbling towards the penalty spot.

Georginio Wijnaldum, with 20 Premier League goals before this game and 19 at home, timed his run to perfection and fired in a controlled volley. The power gave Neil Etheridge no chance. A difficult chance and now Wijnaldum has two away goals! At first glance, it looked like Alexander-Arnold had miss hit his corner but Klopp explained the move had been discussed at half-time.

Liverpool still play and pray, they have the X Factor, but can Manchester United really beat their neighbours on Wednesday?

Man of the Match: Joel Matip

Update: Thailand prepared for ‘State of Emergency’ or ‘CIVIL WAR’

Thailand marijuana festival has visitors on a high