Thai Cop: A Krabi police officer was filmed riding on the back of a citizen’s motorbike yesterday while chasing down and shooting out the tires of a pick-up truck, in a cross-provincial car chase straight out of a Hollywood action film.

At about 10am yesterday, Ao Luek district police received a tip from police on Phang Nga island that a perpetrator wanted for a hit-and-run incident on the popular vacation spot was fleeing to Krabi, reported M Thai.

In response, Ao Luek Police set up a checkpoint on Phetkasem Road in Krabi’s Na Nuea area to stop the pick-up truck. The truck, however, sped right through the checkpoint.

And thus began a car chase for the ages.

Having witnessed the truck evade the checkpoint, a nearby civilian, identified as Chainarong Sookoon, volunteered to help, and asked a police officer to jump on the back of his motorcycle, according to Khaosod.

The chase, with Sookoon driving and an officer riding (and firing his gun) pillion continued for the next 20 kilometers. 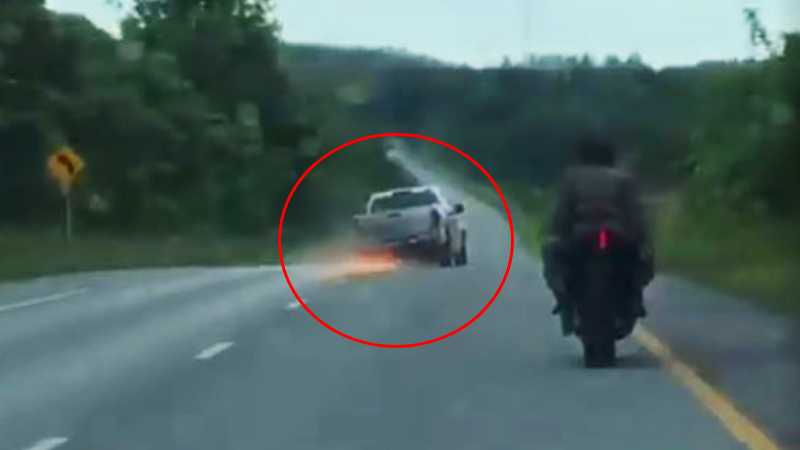 The passenger cop shot at the pickup truck’s tires several times, finally hitting the truck’s back left tire, which not only blew out but burst into flames. And he kept going.

Finally, the driver lost control of the wobbly and now three-wheeled vehicle, which crashed on the side of the road, allowing police to make the arrest.

An initial interrogation revealed that Kietisak had gotten physically abusive with his girlfriend in Phang Nga before the incident. Fleeing the scene of the abuse, the suspect compounded his troubles when he hit another car and sped away, reported Manager.

Kietisak is currently facing four charges including driving under the influence, reckless driving, violating traffic lights, and driving with disregard for other people’s safety.

Worth noting that none of the charges address the fact that he allegedly beat up his girlfriend.

Police arrest catfisher who scammed Thai man out of THB89,000