Dog Torture: Facebook members of Watchdog Thailand are up in arms against a senior Army officer who ordered his subordinates to torture two stray dogs that disturbed him during his jogging, the Thai-language daily Thai Rath reported (Jan 3, 2019).

According to an eyewitness, the officer ordered two soldiers to tie up the dogs’ legs, sealed their mouths and let them lie in the hot sun for nearly seven hours.

He later called a garbage truck and told the driver to discard the dogs at a dump site about three kilometers from the Army camp.

It’s not known whether the dogs had been rescued or not.

Taxi Driver Gets Stuck After Driving Over Wooden Footbridge 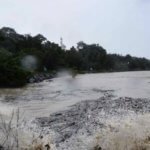 Areas to avoid during attack of Pabuk storm.