Home » Teen hangs himself after drawing pentagram ‘with his blood’

Lom Kao police officers in Phetchabun province are investigating the suicide of a 17-year-old boy after his parents called them on finding the body of their son hanging from the bedroom ceiling around midnight on May 3.

The parents had already taken the body down by the time the police arrived.

Forensic staff from Somdet Phra Yupparat Lom Kao Hospital reportedly said the boy was dead for at least six hours. They found several cut wounds on his left arm and a drawing of a pentagram with blood on the floor.

The deceased’s parents told officers that their son was in Matthayom 5 (junior year high school), but lately stopped going to school, instead spending almost the whole day in his room playing video games and coming out only when he wanted to eat. They added that the boy was always a “secluded person” and had a hard time making friends.

Forensic staff speculated that he drew the pentagram on the floor with his own blood. They are conducting additional tests to confirm this. 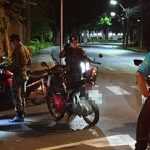 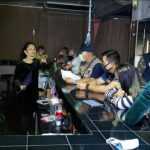