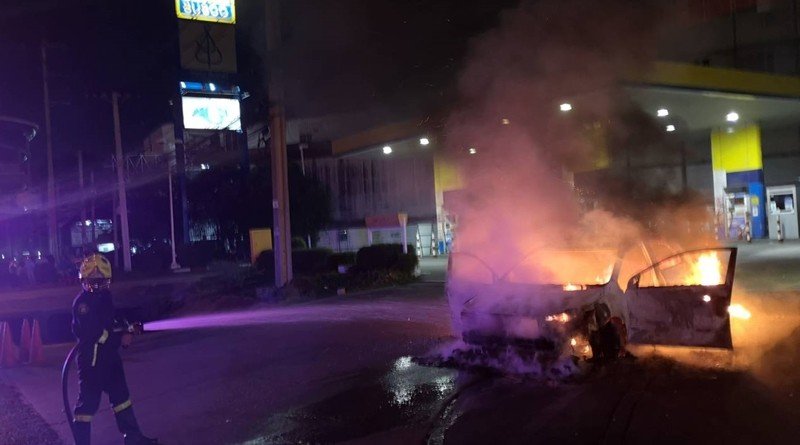 A Taxi caught on fire yesterday (21 May 2019) while refilling NGV in a gas station, luckily no one was harmed in the incident. The incident took place on the 21st of this month in Bangkok. The taxi was refilling its NGV tank in the Susco NGV Station located on Vibhavadi Rangsit Road near Kasetsart University.

Chanyut Chadamon, the taxi driver reported that he had just dropped off a passenger at the Don Muang Airport. While back on the road, he realized that the taxi needed an NGV refill. Chayut drove into the nearest NGV station near him at the time.

Everything seemed normal at first when he proceeded to refill the NGV tank as usual. Then suddenly, the NGV tank was almost full when smoke started to come out from the engine followed by light sparks. The staff at the NGV station saw what was happening and realized that the car needed to be far away from the NGV source.

Chayut and the staff helped push the car to the front of the NGV station. Together they quickly reached the front. This is when the whole car turned into flames, Chayut and the staff ran away from the car just in time. Luckily, the group of people knew what they had to do and chose to carry the safety precautions before taking the time to go in shock and no one was hurt.

If the car was not pushed to the front in time, the possibilities of what could have been are extremely terrifying. The firefighters quickly came and distinguished the flames before it could spread further. The remains of the car are currently in the investigation process to find out what had caused the fire. The NGV station in the incident is currently on temporary close down until the source of the fire is discovered for the safety of the staff and the people nearby.