Home » Immigration says all desks were staffed when Suvarnabhumi Airport was overloaded with 4,600 visitors 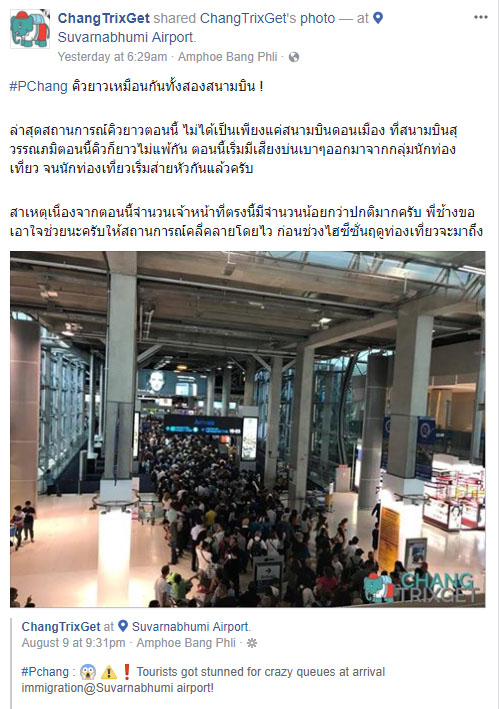 Immigration says all desks were staffed when Suvarnabhumi Airport was overloaded with 4,600 visitors

In another airport horror, the Immigration Bureau insisted that all passport desks at Suvarnabhumi International Airport were staffed on Wednesday afternoon when photos of their lengthy queues were shared online.

Less than a week after complaints from passengers at Don Mueang, Bangkok’s other airport, who had to wait as long as four hours on Saturday to be cleared by immigration, photos of the insanely long lines at Suvarnabhumi let people continue their Thai airport bashing on social media.

AFP journalist Jerome Taylor shared a video of the queues at 4pm on Wednesday, commenting “Imagine being a visitor after a long flight, with tired kids, and this is your first experience of Thailand. Would you come back?”

Another Twitter user also shared a photo of the immigration area flooded with tourists on the same day.

Popular travel Facebook page ChangTrixGet shared this photo on Wednesday, it captioned that tourists were “shaking their heads.”

According to the statement from the immigration bureau Wednesday between 3pm – 4pm was peak time, when 20 flights landed, and the airport had to process 4,600 passengers, while the capacity of the immigration area was made for only 3,000 bodies.

It insisted that all counters were staffed at the time, and it could clear out passengers within one hour.