KNAF Talent First car racing talent Rinus VeeKay and Juncos Racing have extended their successful partnership that started in early 2018 by another year. After claiming the title for Juncos Racing in the 2018 Pro Mazda Championship Presented by Cooper Tires, the 18-year-old driver from Hoofddorp in the Netherlands has now signed a contract with team owner Ricardo Juncos to go for the title in the 2019 Indy Lights championship, the highest level of the Road to Indy Presented by Cooper Tires. “I’m really looking forward to cooperating and being successful again with Ricardo Juncos and his team,” said a happy VeeKay

After claiming the title of vice champion in the 2017 Cooper Tires USF2000 Championship, KNAF Talent First car racing talent Rinus VeeKay stepped up to the next level this season, the Pro Mazda category. For this campaign VeeKay joined Juncos Racing early 2018 and it was the start of a very successful partnership. In his maiden season in the Pro Mazda Championship Presented by Cooper Tires, the then still 17-year-old racing talent from Hoofddorp in the Netherlands won seven out of sixteen races and claimed the title in commanding style, being the first champion in the history of the new and much faster PM-18 generation Pro Mazda cars. 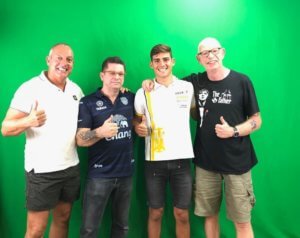 Ex-boyfriend kills love of his life, security guard, himself in a moment of rage