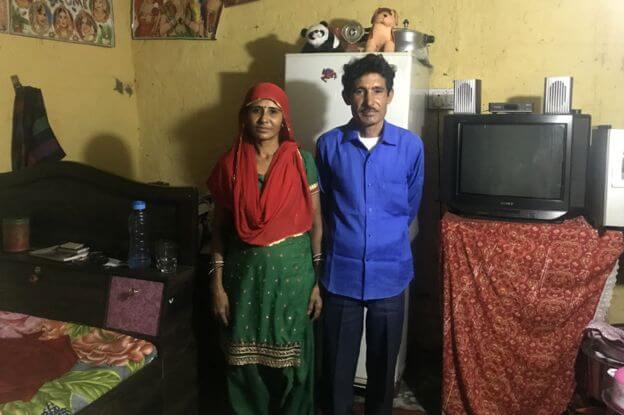 At Sanganer prison, in the Indian city of Jaipur, inmates get a roof over their head, but no money and no food. This means they must go to work and earn their living beyond the prison gates, writes Masuma Ahuja – as labourers, factory workers, drivers, even yoga teachers.

Ramchand drives a school bus. His wife, Sugna, works at a garment factory. On a recent hot afternoon, I drink a cup of tea with them in their one-room house, which has yellow walls and a corrugated metal roof, a fridge and a TV, a lunchbox hanging in the corner next to photos of gods and a stack of newspapers. From their door, you can see cars zooming by on a nearby highway and beyond that, a skyline of modern high-rises.

This is how they tell their story: he was lonely, her family had left her. Their neighbours wanted to set them up and arrange their marriage, so she wouldn’t be a woman living alone, so he would have someone to take care of him, cook for him and make him rotis. “I can make my own rotis,” he says. He married her because he fell for her.

There’s seemingly little out of the ordinary about their house, or their story. Except that Ramchand and Sugna are both convicted murderers and they live in prison.

Their house is in Sanganer Open Prison, in Jaipur, the capital city of India’s western state of Rajasthan. This prison has no bars or walls, no security guards at the gate, and prisoners are allowed – even encouraged – to go out into the city and work every day. This prison, which has been open since the 1950s, is home to 450 prisoners and is one of about 30 such institutions in the state of Rajasthan.

I go to Sanganer with Smita Chakraburtty, the woman behind a campaign to make open prisons the norm across India. She has made the case to India’s Supreme Court, which in turn has asked states to look into setting up more places like this. She now serves as an honorary commissioner of prisons in Rajasthan, and was recently shortlisted for India’s Agami Prize for her work on the penal system.

Image caption
Smita Chakraburtty with Sugna (right) and another prisoner
“The criminal justice system addresses an incident… and doesn’t know what to do with an individual,” Chakraburtty argues. Her cause is gaining momentum: four other states in India established new open prisons last year. When I visit Sanganer with Smita, she gives prisoners the latest updates on her work, and then they swarm to me, eager to chat. While there are no guards and anyone can enter the prison, visitors like me are rare.

I sit on the floor in a children’s nursery at the front of the prison grounds and talk with a group of men and women who are inmates. When I ask them why they’re in prison, many simply say, “302,” referring to Section 302 in India’s Penal Code which dictates the punishment for murder. They call the open prison “the farm,” and gush about how easy it is to live here, how happy they are.

Image caption
Prison dwellings, and beyond them a residential area
To get to Sanganer, they all have to have served at least two-thirds of their sentences in closed prisons, and they say that compared to those places, this is freedom. In fact, the government in Rajasthan has had to evict prisoners who didn’t want to leave. They had set up lives – stable jobs, schools for their children – in this neighbourhood, that they didn’t want to give up at the end of their sentences.

Still, many prisoners tell me they struggle with outsiders’ perception of prison. Some women inmates say it’s easier to marry a man on the inside, because men outside prison don’t understand their experiences. Even getting a job can be hard for some inmates, they say people are hesitant to hire them once they present their prison IDs.

Open prisons in India
At the end of 2015, out of a total of 419,623 prisoners in India, 3,789 (0.9%) were held in open prisons
Two states, Rajasthan and Maharashtra had 42 open prisons – more than half of the total
Twenty-one open prisons were distributed among 15 other states
Source: Prison Statistics India 2015

But they still live a version of a normal life here: they buy motorcycles, smartphones, and televisions; they wear no prison uniform and live in small numbered houses. Each prisoner is allotted a government-provided house along one of Sanganer’s narrow lanes. The rest is up to them. The prison doesn’t provide them with any food, water or income.

So every day, most of them leave the prison grounds to earn a living: men convicted of murder work as security guards, factory workers and daily labourers. I even meet one inmate who’s a yoga instructor and another who’s a supervisor in a nearby school.

The only real rule, I’m told, is that prisoners must make roll call every evening. Sanganer hardly seems like a prison, except at this moment. At sundown, representatives of the prison’s elected governing body stand at the prison entrance. An inmate with a microphone begins taking attendance, calling out numbers from 1 to 450. Sometimes, he stops at a number and scolds a prisoner for leaving rubbish outside his or her house.

Everyone must be accounted for… or risk return to a closed prison.