Deputy Prime Minister General Prawit Wongsuwan has instructed police to seriously crack down on football gambling and debt-collecting violence ahead, during and after the 2018 FIFA World Cup, which will be held in Russia from June 14 to July 15, deputy national police chief Pol General Chalermkiat Srivorakan said on Tuesday.

Prawit is the deputy PM overseeing police and sport affairs.

As part of the operation – dubbed “Pitakpai Dulaeprachachon 61” (guarding from harm and taking care of public members in the year 2018) – Chalermkiat had also proposed that some 1,000 websites linked to football betting be shut down and around 1,000 “Net Idol” celebrities in Thai social media, who are based across the country and allegedly appear in football-gambling advertisements, be investigated.

He said police were in the process of verifying the identities of those accused of being “Net Idol” persons, with a view to summoning them for testimony.

If found guilty, they would be charged under Article 12 of the Gambling Act, which says that anyone arranges for or promotes others to gamble shall be punished with a one-year jail term and/or a Bt1,000 fine, he added.

Passer-by stops woman, 70, from throwing herself off Krungthep Bridge 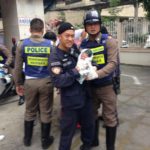