A political party was treated to an internet flambe for its denunciation of the “immoral” marketing for a popular Netflix series about teen sex education.

Netizens brigaded the Ponlamuang Thai Party’s social media page after it announced Monday that members had complained to broadcasting regulators about giant billboards promoting “Sex Education.” The heretofore unknown party said the ads amounted to “illegal activity of a transnational corporation” that would “negatively affect the youth and create social problems.”

The post showed several members at the National Broadcasting and Telecommunications Commission demanding it immediately remove the billboards alongside highways in Bangkok.

“The billboards are a marketing tactic using inappropriate content to attract people to sign up,” the statement read. “It presents obscenity with plots and scenes showing teenagers having sex explicitly [and] poses the risk of youth being wrongly encouraged by watching it.”

One problem – the commission has nothing to do with regulating advertising.

Commissioner Prawit Leesatapornwongsa said Tuesday that although he hadn’t heard about the complaint, regulating such content is not under their authority.

“We regulate the operators, not their content,” he said by phone. “Netflix is also not considered television.”

The series, which premiered on the platform earlier this month, tells the story of a socially awkward British high school student who imitates his professional sex therapist mother to become an amateur consultant to his schoolmates. It’s rated 8.6 out of 10 on IMDb and has received a 91 percent fresh rating from critics on Rotten Tomatoes.

After the party’s complaint became news, its Facebook page was quickly voted down to 1.6 stars with comments mimicking restaurant reviewers justifying their one-star votes.

“The parking lot seemed to be spacious, but once inside it was full with dinosaurs and cockroaches. Very dirty. Food tastes so bad. Yuck,” wrote another user, Somyos Vann Mekasingharak

After the backlash, the post was deleted. The party later released another statementdefending its actions.

“Our party members saw this [series] yesterday, and all think that it’s a [series] that negatively affects the youth and creates social problems,” the post read. “It shows high school students doing drugs, engaging in promiscuity, wanting to have an abortion… Although the content can be broadcast normally in the West… it’s a great challenge to Thai society.”

“Younger generations might be happy when they can do whatever they want while their parents feel miserable about their children’s problematic behavior, doing something inappropriate,” it continued. “Overall, the [series] is called sex education, but its content is immoral.”

That message wasn’t received much better.

“Thank you for helping eliminate some bad choices in the upcoming election,” user Chatree Rungsang commented on the post.

“Stupid party, everyone in the photos,” wrote another user Suraphong Ponanun. “With this much attempt to block it, our country still has a very high rate of teen pregnancy. It shows how much knowledge of sex education is among our teens. With this attitude from you people, I feel even more hopeless.”

Sex education in Thai schools remains poor as it’s still a social taboo. A UN study found teen pregnancy rates in Thailand increased 54 percent from 2000 to 2014, citing lack of comprehensive sexual education as one of the major problems. 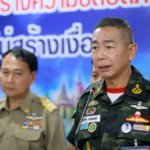