The number of people violating the curfew has seen a big jump since the relaxation of lockdown measures while police crackdowns for violation of laws have led to confiscation of goods worth over Bt238 million.

Pol Lt-General Piya Uthayo, assistant police chief and police spokesman, said during the press conference of the Centre for Covid-19 Situation Administration (CCSA) on Sunday (May 10) that it has been seven days after PM General Prayut Chan-o-cha issued regulations effective from May 3 to allow some activities to resume.

Royal Thai Police has compiled statistics on the prosecution of offenders of two types: being outside during the curfew hours from 10pm to 4am without permission or without reasonable reasons, and gathering in a manner that risked spreading the infection.

The number of offenders during curfew increased from 3,743 cases to 4,570 cases, up 22.09 per cent. People were found running errands without reasonable cause, travelling back to their accommodation late, coming out on some pretext, driving around, etc.

Illegal gatherings that are vulnerable to infection have increased from 664 cases to 704 cases, up 6.02 per cent. Of this number, group drinking and drug abuse have increased while the number of gambling cases has decreased but with more players joining.

After inspection of nearly 91,000 businesses, such as restaurants, beverage shops, supermarkets, retail stores, barber shops, beauty salons, sports stadiums and pet care shops, police found a small number of non-compliance cases totalling 3,039, or 3.34 per cent due to lack of knowledge and understanding. Overall, it found that people have been cooperating.

Police and relevant agencies are taking action against those who are violating the law by selling goods at a price higher than allowed by law, not showing the price in front of the store, or illegal imports. More than 490 parties have been arrested and 4,372,006 pieces of face masks, 409,453 litres of alcohol, 5,099 temperature monitors, 61,523 virus detection kits, worth over Bt238,174,135, have been confiscated.

General Piya said: “Our goal is not to punish or put people in jail because that will not really help the situation. We just want to help bring Thailand out of this crisis. “ 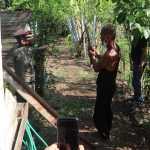