Weerachai, together with police officers and Food and Drug Administration (FDA) officials, conducted the search at 8.30am at Kalow Rich Inter Co Ltd’s three-storey commercial building in Soi Charansanidwong 75.

The company is accused of manufacturing and distributing sibutramine-laced food-supplement products for weight loss.

A man, Jensan Techasuriyanant, was identified as the firm’s managing director.

The raid found 700 boxes of products worth Bt1.365 million on the premises, Weerachai said.

He also commented that the company’s social-media post claiming that the batch that police had tested and found to contain sibutramine was a copycat product, was believed to have been a tactic to defend the company in court.

Meanwhile, police will soon proceed with legal action against Thai celebrities who appeared in advertisements for the products in question, along with the person who wrote the script for the ads, he added.

FDA executive and pharmacist Supattra Boonserm said that, besides the sibutramine that the agency had made illegal in Thailand, the authorities had found two other medicines as additional ingredients in the product: an antidepressant called fluoxetine, and a fat-blocking medicine called orlistat.

Both substances – whose origins would later be determined in a police investigation – could be harmful if they are taken for a prolonged period, she said, adding that the FDA only allowed certain factories to manufacture products with these two pharmaceuticals and did not permit food supplements to contain either of them.

As the initial probe found that Kalow Rich Inter had obtained a product-manufacturing licence, but allegedly added sibutramine and two other substances since 2017, the FDA would check the product for further evidence to prosecute Jensan, Supattra explained.

She also said the public should be aware that the FDA had never approved any products claiming to slim a person down in just three to seven days.

No food supplement should cause palpitations or loss of appetite as side effects, she stressed. 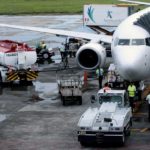 Garuda to show no mercy to passenger cracking bomb joke