Police have brought in a Nigerian man for questioning over the shooting of Russian expat Elena Kharenko, 52, at her home in Rawai early Wednesday morning (Aug 30).
Officers took Nigerian national James Chukwunweike Chijioke, 27, into custody at a house in Soi Jailek-Samakkee 2 in the Saiyuan area of Rawai at about 10pm last night (Aug 31). In the house officers found a collection of items later identified as stolen from another house in Rawai on July 26. The officers named as leading the investigation were Maj Gen Pawat Prommakrit of Region 8 Police, Phuket Provincial Police Deputy Commander Col Akanit Danpitaksarn, Chalong Police Deputy Superintendent Lt Col Sanan Chanrong and Lt Pawarit Panajinaporn from Phuket Immigration.

Chijioke and the items seized were taken to Chalong Police Station, where Sasithorn Tumpan, 39, identified a Louis Vuitton bag and a Corum watch, among other valuables, as stolen from her house also in Rawai on July 26. A gold bar that also went missing from her house the same day was not among the evidence presented, Ms Sasithorn noted. Chijioke denied any involvement in the theft of items from Ms Sasithorn and of the robbery and shooting of Ms Kharenko on Wednesday – and police have yet to confirm any charges against him.

Lt Chanat Hongsitthichaikun of the Chalong Police confirmed to The Phuket News yesterday that officers had question Ms Kharenko at Bangkok Hospital Phuket, where she was recovering from the two bullet wounds sustained in the attack – one in the left waist and the other in the lower right leg. “She was alone in the house at the time, her husband was not at home,” Lt Chanat said. “Ms Kharenko said she was asleep, but was woken by noises in the house, then she saw the suspect. “The burglar told her to be quiet, but she screamed, so the suspect pointed the gun at her. That’s when she ran into the bathroom to hide and the suspect opened fire at her, hitting her twice,” Lt Chanat said.

The attack occurred at about 3:30am. Police found three .38-calibre bullet casings at the scene: two in the house and one in the garden outside. Ms Kharenko said she saw only one man in the house, and that his face was not covered, said Lt Chanat. The burglar made off with cash, a laptop computer and a mobile phone with a total value of B60,000, he added. “The robber did take a small safe box, which was found discarded nearby,” he said. Phuket News

“I can do whatever I want” says Thai PM 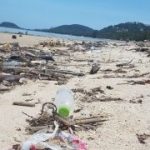 Garbage Problem is getting out of control in Samui