In the early hours of Saturday September 2nd, over 1,000 competitors gathered to begin the grueling Pattaya Marathon 2017.

Runners came from all walks of life with a healthy mix of both men and woman from a whole range of different countries.

It was the 26th time that the event has been hosted and it has been growing in popularity each year. The event itself is put together by the Sport Tourism Destination Authorities for Thailand and aims to promote both tourism in the region, as well as promoting healthy lifestyles towards the Thai population.

Due to the popularity of the event, huge sponsors appear every year, throwing weight behind it and has people for all over the country come down to join in.

For the majority of competitors, it is a chance to test themselves both physically and mentally for the pressure and stress that both your mind and body endure whilst running a marathon, but it’s also intended to be fun too.

Competition is tough, however, with top class athletes also competing in the event.

The star performers at the end of the race were Mr. Gilbert Muge, from Kenya, who won the men’s competition with an impressive time of 2.31.55 and Miss Margaret Wangui Njuguna, who took the women’s title with a time of 2.56.05.

A big congratulations goes out to all competitors who competed in what turned out to be another fantastic event. I missed out this year but training has already started for next year. 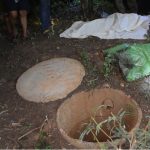 A Thai mango a day may keep cancer away, says new research