Home » The Opportunity for Thai Students on NASA Scholarships

The Opportunity for Thai Students on NASA Scholarships

Thai students, a boy, and girl, will get an introduction to space during a six-day advance space academy program at the US Space & Rocket Centre, the official visitor center for Nasa Marshall Space Flight Centre in Alabama.

US Ambassador to Thailand Glyn T Davies said the scholarship would strengthen US and Thailand relations in science and technology. Eligible applicants include Thai students aged between 14 and 18 years old on the day of registration.

The applicants will have to pass the space camp aptitude test, which is composed of 100 English-language, multiple-choice questions related to science, technology, engineering and mathematics (STEM). Basic knowledge of physics, dynamics, logic and general knowledge on space exploration will also be tested.

The application fee is Bt500 and tests will take place at KMITL on October 22. Est Cola is also providing an additional 10-day scholarship to study at the US Space & Rocket Centre for students of any nationality aged between 12 and 30. Chayanis Opassereepadung, 17, from Wattanapong Wittaya Academy, who won the scholarship last year, said she attended training courses on how to live in a spaceship with zero gravity.

Krit Kunplin, a representative of the US Space & Rocket Centre, said the scholarship winners might have a chance to fly on a spaceship to Mars as Nasa plans to colonize Mars in the near future. However, on its website, Nasa says it is planning a journey to Mars in the 2030s. Asia Nation 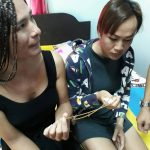