Divers will, on Monday, try to recover one more body spotted under the Phoenix dive yacht that sank near Phuket on Thursday, Tourism and Sports Minister Weerasak Kowsurat said.

Weerasak said after the body is retrieved and brought ashore, it would take the body count to 42. Fourteen Chinese tourists still remain missing.

The Phoenix with 105 people on aboard, most of them Chinese tourists, was hit by giant waves and sank on Thursday on its way back from Koh Racha to a Phuket pier.

Weerasak said the 42nd body was seen trapped under the boat. Divers would try to flip the boat by using tools to inject sand under it.

“If we can flip the boat, we hope to find the rest of the missing,” Weerasak said.

He said it was also expected that the bodies of some of those missing would float on Monday and rescuers would try to spot and retrieve them before they sink again.

Weerasak said officials would also inspect various nearby beaches to check whether bodies had washed ashore and helicopters and planes would continue to fly over the sea to search for the missing. 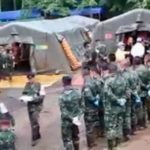