Details are scarce however Pattaya City Law Enforcement reported this morning that one athlete, whose name was not released, was taken to a local hospital with serious injuries after losing control of their bicycle during the cycling portion of the Triathalon event and crashing into road barriers.

The rider was wearing a helmet however it was knocked off during the collision with the barriers which are used for construction in Pattaya.

This is far from the first time someone has been injured running into the barriers, however, has generally happened late at night from a motorcycle and not bicycle riders.

Pattaya City recently added additional lights and warning signs to the barriers as well as increased the height at many of them to make them more visible to commuters.

It was recently announced that the road construction for drainage and underground cable work will extend until next Summer.

The seven most dangerous sex positions 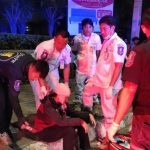