A mentally challenged mother in Sakon Nakhon, not understanding that her boy had drowned, put him to bed before the grandmother learned of the tragic incident the following morning.

The grandmother alerted the head of Ban Don Chiang Khoon village in Tambon Chiang Krua in the province’s Muang district and the village head called police.

The boy’s body was found on the mattress where his mother, Thassakorn (surname withheld), 31, slept.

The grandma told police that she went to wake up the mother and son, only to find him dead.

The mother was unable to communicate so nobody knew details of what had happened. But she pointed to a large jar under the high-platform wooden house.

Police believe the boy played in the water in the jar and drowned. The mother, not realising he was dead, had carried him to bed. 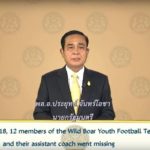