Home » Girls are being WHIPPED to cure them of illness – Video

WOMEN as young as 14 underwent a brutal ritual to get rid of evil spirits and cure their mental and physical diseases.

The astonishing footage shows thousands of women and teenagers kneeling in a long queue as they wait to be flogged.

Using a piece of wood and a rope, the priests hit the so-called “salvation seeker” on their arms, hands and wrists. It foes on until the subject of the purification ceremony cannot bear the pain anymore.

As the ritual goes on, thousands more of people, including children, witness the flogging behind a rope acting as a barrier. Officers make sure they do not get too close.

The ceremony is just one of the many rituals going on during the Hindu festival of Vijayadashami.

It takes place at the end of the summer at the ancient Sri Achappan Temple at Bavithram Vellalapatti.

It is a remote village situated on the border of Tiruchi and Namakkal districts of Tamil Nadu, southern India.

While all the women are said to be volunteers, reports revealed some were brought to the temple by force.

Vanity, a student from a nearby village, told The Hindu her parents insisted she attended the ritual.

She said: “They forced me. Now my friends will look at me suspiciously once they know that I attended the festival. It is known for curing mental disorders.”

Some women defend the brutality

But other women defend the ritual.

60-year-old Chelli, who said she has attended regularly this ceremony in the past decade, explained. “A single lash can cure them of their illness, pain and other evils.”

A newly-married woman decided to undertake the painful ritual. Her her in-laws told her they believed she was possessed.

As evil spirits would not bring good luck to her new home, she decided to try to get rid of them in that way.

And a 14-year-old girl said she volunteered to the flogging to solve problems with her periods.

However, she conceded the ceremony was extremely painful.

She said: “It pains a lot, it burns more but we have to bear the pain in order to free ourselves from the evil spirits and cure our illness.”

When asked if such a ritual was a crime, one of the priests explained all women were volunteers. They are brought to the temple by their religious convictions.

He said: “It is the belief of the people that bring them here.

“If no one comes to get flogged, we won’t go to their houses and ask them to come to the lashing ground.”

Vijayadashami celebrations include processions, fireworks to mark the destruction of the evil and bonfires.

This festival is seen as an act of purification ahead of one of the most important and widely celebrated Hindu festivities. Diwali, the festival of lights, which is celebrated 20 days later. 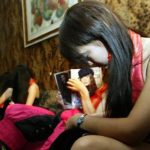 Is Kuala Lumpur the Sex Capital of Asia? Good Question