Police in Chachoegsao launched a manhunt on Tuesday after a taxi motorcyclist allegedly collided with a female pedestrian, then dragged her on to the roadside and left her to die.

Police from the Bang Pakong police station and officials from Chachoengsao emergency rescue arrived at the scene on the Old Sukhumvit road in front Wat Klang Bang Pakong in Moo 8 village at 5am and found the body lying by the road.

The woman, who was carrying Bt380 in cash but no identification document, was later identified by her husband as Banyen Pan-imeng, 52.

A passer-by, Anuchit Sawangjit, 18, said he was riding his motorcycle to a fresh market when he spotted a taxi motorcyclist dragging an injured woman on to the roadside.

Anuchit said the motorcyclist was wearing a taxi motorcycle jacket with a No 14.

He said he asked the motorcyclist what had happened but got no reply before the man sped off.

Pol Capt Manit Boonteng, deputy inspector at Bang Pakong station, said investigations traced the jacket to Chan Lertsuk, who works as a taxi motorcyclist at a stand in front of Wat Bon Kongkharam.

A sandal left at the scene was found to match a bloodstained sandal found at Chan’s house.

As rescuers were about to take Banyen’s body to the district hospital, her husband arrived at the scene and burst into tears. He said his wife, who had a bad leg, had limped out of the house early that morning to sell goods at a nearby market. After she failed to return home as usual he came out to look for her. 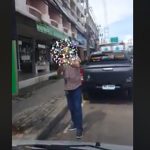 Foreigner places no parking sign on public road in Pattaya