Manhunt launched: Police are hunting for a construction worker in Nakhon Ratchasima’s Sung None district after he allegedly killed his friend by stabbing him and slashing his throat because he refused to loan him Bt100 to buy liquor.

Somsong’s wife, Sangwal Batpho, 37, said the suspect stayed at their house and worked for the same construction company as her husband.

She said her husband and Thanongsak drank together in the evening and when the liquor ran out the suspect wanted to borrow Bt100 from her husband to buy more.

Sangwal said her husband refused to lend him the money and told the suspect to go to bed as it was late and they had work the following day.

Sangwal said Thanongsak became angry and kicked her husband who fled into the kitchen. The suspect followed him and grabbed a kitchen knife and killed him before he fled the scene on a motorcycle. 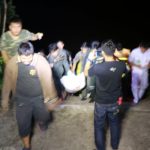 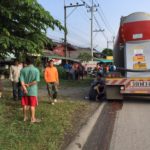