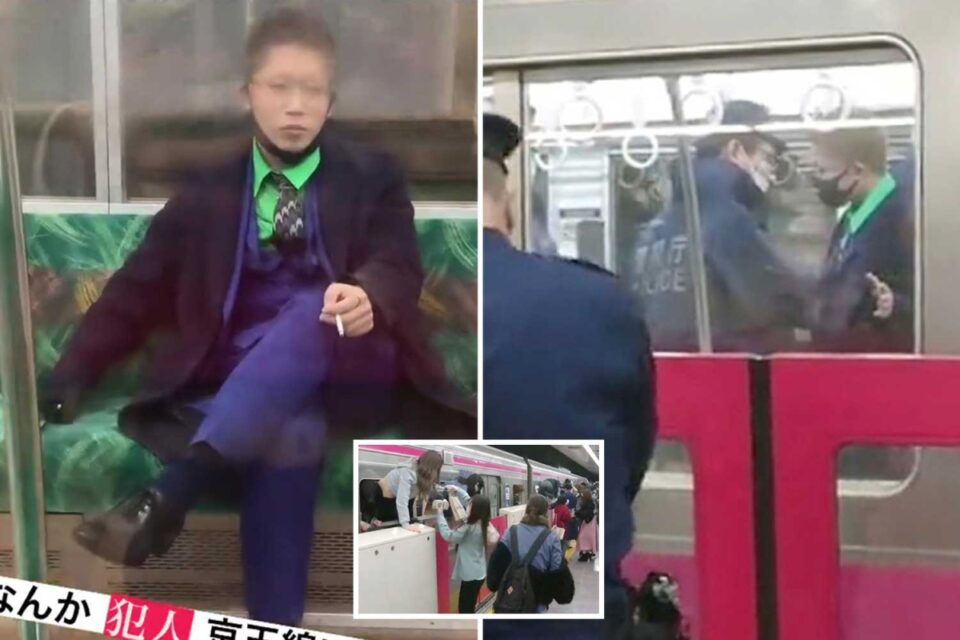 A knifeman dressed as the Joker stabbed several people on a Tokyo commuter train before starting a fire on board.

Passengers at Kokuryo station were seen running in horror as the assailant doused the carriage with a flammable liquid and set it ablaze.

Japanese media said at least 10 passengers were injured, including a man in his 60s who has been left in a critical condition.

The suspect, a 24-year-old man, was arrested on the spot and is being investigated for attempted murder.

The attack occured on Sunday evening, which took place as partygoers headed for the city centre for Halloween.

Shunsuke Kimura, who filmed clip, said he saw passengers desperately running and while he was trying to figure out what happened, he heard an explosive noise and saw smoke wafting.

He also jumped from a window but fell on the platform and hurt his shoulder. The eyewitness added: ‘Train doors were closed and we had no idea what was happening, and we jumped from the windows. It was horrifying.’

Another video showed passengers rushing to squeeze out of the train’s windows and onto the platform where the train had made an emergency stop.

Recalling the moment he saw passengers running in a panic towards his train car, he added: ‘Then, I saw a man walking this way, slowly waving a long knife.’

Another video shared on Twitter showed a bespectacled man dressed in a purple suit and bright green shirt, as worn by Batman’s nemesis, seated in an empty train puffing on a cigarette.

His legs were crossed and he looked calm. He can be seen through the window being surrounded by law enforcement in a subsequent clip.

The Keio express line train was headed for Shinjuku, the world’s busiest rail station, at around 8pm local time.

Local media reported later that the suspect told authorities he ‘wanted to kill people so he could be sentenced to death’.

The attack was the second involving a knife on a Tokyo train in the past two months.

In August, the day before the Tokyo Olympics closing ceremony, a man stabbed 10 passengers on a commuter train in Tokyo in a random burst of violence.

The suspect later told police that he wanted to attack women who looked happy.

Also in August, a man threw sulphuric acid over a victim at Shirokane-Takanawa station, allegedly because he was upset over his use of ‘casual and informal language’. 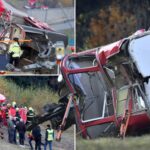 Cable car crashes into mountain killing at least one