Home » Laws in Thailand – How to Stay Out of Jail 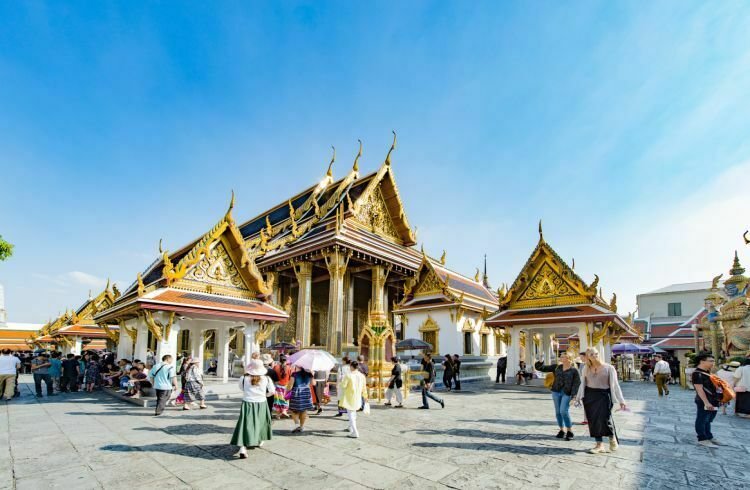 Your dream trip to Thailand could easily turn into a nightmare if you fall on the wrong side of the law. We take a look at how you can avoid copping a fine or time in jail.

Here’s a quick guide to Thai laws you might cross knowingly, or unknowingly:

It doesn’t get more obvious than the following statement taken from the Customs Department of the Kingdom of Thailand Website:

“Violators of laws related to illicit drugs, e.g., having and holding for use, or being a producer, seller, or transporter are subject to the death sentence.“

That‘s right, the death penalty. Don’t be stupid in Thailand. Never buy, use or transport drugs in any manner during your stay.

Lese Majeste is a law which was introduced in Thailand in 1908 and states that it’s a serious offense to defame, insult, threaten or defile any image of the Thai royal family.

This also includes defacing Thai money, so  don’t step on the local currency, Thai baht (THB). It’s against the law and could result in imprisonment.

Even talking about the Thai king and his family is generally frowned upon, especially in public areas. You can be arrested and sent to jail.

If you overstay your visa, you will be detained at the immigration detention center.

If however, you make it to the airport, you simply pay your overstay fine, and off you go. We’d rather you be safe than sorry, so make sure your visa is in order and don’t overstay your welcome.

The drinking age in Thailand is 20, and it’s in the interest of bar owners to enforce this, as establishments do occasionally get raided by police looking for underage drinkers and patrons under the influence of illegal substances.

This doesn’t mean you can’t buy alcohol if you are underage – many people do – but we advise against it. Again, it can result in jail time.

Drinking alcohol is illegal in the following locations in Thailand:

Caveats apply, for example, if a ceremony at a temple requires imbibing, in which case it is legally permitted.

The penalty for illegally drinking alcohol at one of the above locations is six months’ imprisonment, and/or no more than a fine of 10,000 Baht.

In July 2017, Thai police announced the monitoring social media closely to further enforce the Alcoholic Beverage Control Act (2008). This law prohibits “the display of logos and brands of alcoholic products in order to persuade people into drinking alcohol whether directly or indirectly.” Anyone found breaking the law can be charged, so think twice before taking that selfie with the Singha by the pool or it may cost you a US$1,500 fine.

Street photography is generally allowed in Thailand, however there some places where you cannot take photos.

Some temples won’t allow photography, while others are more relaxed but will still prohibit photographing images or statues of Buddha. Check before taking photos inside temples (if permitted) and avoid taking photos of people praying or worshipping.

Photography is forbidden inside bars and other venues in red light districts including Patpong and Cowboy.

If you want to take a photo with or of locals, including monks, always ask first. If it’s permitted, don’t forget to smile in your photo and thank the person with a wai (slight bow) afterward, especially if you are younger than the person you had the photo taken with.

Avoid giving money to children who ask for it if they end up in your photos, as it promotes a begging culture.

Taking photographs of the Thai royal family is also a no-no, as are photos of military posts and border points.

Want to put your drone in the air for a bird’s eye view of it all? Think again. There are many regulations around operating drones in Thailand whether for recreational or commercial use.

Because drones have a camera, you will need permission from the relevant authorities.

You will need drone insurance and also have to apply for a permit from the Civil Aviation Authority Thailand (CAAT) well in advance of your trip, as the application can take anywhere from 75 to 104 days.

Apart from the government-supported National Lottery and betting on horses at the racetracks, gambling is largely illegal in Thailand. There no casinos in Thailand, although gambling dens can be found throughout the country, and online betting does occur. However, both are illegal, and being found participating can lead to a fine or jail time.

In February 2018, Thailand authorities banned littering at 24 of its most popular beaches due to increasing environmental concerns. Litterers will be prosecuted and either fined 100,000 THB (US$3,190) or face a year in jail.

You can be fined up to 2,000 THB if you’re caught littering on the sidewalk. If you are fined a sum more than this amount, the individual may not be authorized to enforce the littering law. However, we urge you not to get overly stroppy in the case of an “overfine“. Some travelers have reported that when they were pinged for a littering offense they offered what little money they had on them which was generally accepted.

Members of the Bangkok Metropolitan Authority (BMA) are qualified to enforce this fine – you can ask to see their license. This law also applies to chewing gum, so don’t spit it on the footpath; not only is really annoying to scrape off your flip-flop, but Thai police love arresting people for this one.

Smoking is now banned at 24 beaches in popular tourist spots including Phuket, Pattaya, Koh Samui, Prachuap Khiri Khan, Chon Buri and Songkhla provinces. This has been initiated by the Thai government to reduce the impact on the marine environment and damage to drain systems. After a three-month trial period, this ban may be rolled out on passenger and tourist boats in Thailand.

Breaking this law attracts a fine of 100,000 THB fine, a year in prison or both.

Smoking is prohibited in outdoor exercise spaces, facilities for sports training/playing and competitions, public parks, zoos, amusement parks, markets and children’s playgrounds. Travelers in tour groups are expected to adhere to this regulation.

Electronic cigarettes/vaping have been banned in Thailand since 2014. Plenty of travelers have been caught out and ignoring this will result in a fine and/or arrest and jail time.

Bribery in Thailand: Where Thai Law is Subject to “Influence”

Bribery certainly occurs in Thailand. Get some tips on Bribery in Thailand here.

Thai law requires that travelers carry ID at all times, but don’t ever leave your passport as security when renting a motorcycle or jet ski. Instead, use a photocopy, other photo ID or a substantial cash deposit.

Under Thai law, it’s illegal to go out in public if you are not wearing underwear. Although we haven’t had any stories of travelers being arrested for this offense, listen to what your mother said and always leave the house wearing a fresh pair of undies.

Surprising Thailand Law #2: Wearing a Shirt Whilst Driving a Car

Under Thai law, it’s also illegal to drive a car if you are not wearing a shirt.

Motorbikes & Scooters in Thailand – What Are the Rules?