Home » Motorbikes & Scooters in Thailand – What Are the Rules?

Motorbikes : Thailand is a pretty safe place – if you’re sensible. But a rented motorbike is the most common way to get into trouble. Why? People keep falling off them!

Many travelers to Thailand are by-passing professional services, like public transport and cars with drivers, and are driving themselves.

Before you take off on two wheels, find out the essential information, and the answer to our most frequently asked question: do I need travel insurance to ride a motorbike in Thailand?

Do I Need a License to Ride a Motorbike in Thailand?

If you want to drive a car or ride a motorcycle in Thailand, you’ll need to have absolute nerves of steel to survive emotionally and physically. The country has an appalling road safety record and there are lots of accidents, despite numerous government safety initiatives over the years.

Thailand rates second in the world for road fatalities per capita, behind Libya. During the 2016/17 new year holiday period, 478 people died in road accidents in one week.

You must have a license – one from home (best paired with an international driver’s permit) – or you can get one in Thailand, and it has to be for the class of vehicle you’re intending to hire.

If you don’t have a motorbike license back home, you don’t magically acquire one by flying into Thailand. Thousands of visitors each year rent a motorbike and ride around Thailand totally unlicensed. It’s illegal.

You will need a driving license from your home country if you want to hire a motorbike or car. But, if you do not have an international license or a Thai license, you will be driving illegally.

What if you’re stopped by police? Yes, you can usually pay the police officer off for a few dollars, not that we recommend that! But you should check out our guide to bribing police and find out the going rate for traffic offenses.

The fact that the shop rented you the bike without asking for your license, doesn’t mean you don’t need one. It’s not their responsibility if you don’t check out the local law.

What About a Scooter Under 50cc?

Apart from the fact no one should be seen on a scooter with a sewing machine engine for propulsion – you still need a license; it’s only in some European countries that licenses aren’t required for under 50cc engines.

But Everyone’s Doing It!

Tens of thousands of visitors each year rent a motorcycle or scooter, ride around unlicensed and get away with it. It’s illegal.

Many travelers report ticking the motorcycle box on their International Driver’s Permit. If the policeman who stops you isn‘t fooled, you’ll pay a “fine“, after which he’ll let you go on your merry way. This does not mean you are riding legally; you’ve just avoided the law by paying a bribe.

You can keep on riding regardless, but what if you have a crash, and you need to call on your travel insurance? It’s pretty straightforward; no valid license means you’re riding illegally and you’re not covered.

If you tried that “everyone’s doing it!” stuff on your mother, we’re pretty sure she’d want to know if you were going to jump off a cliff if everyone else was doing it. So listen to your mother.

Do I Need Travel Insurance to Ride a Motorbike in Thailand?

If you don’t have a valid license in the country where the accident happened, you’re riding illegally and you’re not covered. If you’re not sure, give us a call.

You cannot insure against illegal activity. That also includes not wearing a helmet where it’s compulsory (Cambodia, Thailand, Bali) and riding under the influence of drink or drugs (everywhere).

If the shop lets you rent a bike without asking for your license, it doesn’t mean you don’t need one. Again, it’s not their responsibility. It’s yours to check local laws before you go.

Am I Covered if I Injure Myself on a Motorbike?

Injury from a motorcycle accident is one of the most common claims received by insurers.

If iyou suffer serious injuries, and you need medical evacuation, the cost could run to $100,000 or more.

Don‘t be fooled, the insurer will check if you have a valid license (forging that international permit isn’t looking so smart anymore).

Don’t Be an Idiot With Your Own Safety

Here are a few tips to keep you safe while on the road:

If you do end up in a crash, whether you are at fault or not, if you are a farang (visitor), the accident is your fault. Don’t fight it, but negotiate to keep the costs down.

Going to give the motorbike a miss now? There are plenty of other transport options in Thailand. 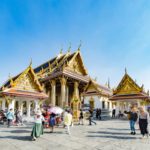 Laws in Thailand – How to Stay Out of Jail