Japan Boxing Commission has banned 58 foreign boxers from fighting in its country, among them are 50 Thais.

JBC said in its Japanese language website www.jbc.or.jp that these foreign boxers are below standard and do not fight properly as professional fighters. JBC has earlier warned these boxers of their improper conduct and unprofessional fighting several times, but was ignored.

A Thai “Saithong” boxing camp manager Saithong Sriprachan who has several boxers listed substandard boxers by JBC said boxers should not be blamed solely for the ban but also the promoters of the competition. He said any contact to have Thai boxers fighting in Japan is similar to Thai promoters importing foreign boxers to fight with the Thai boxers.

The promoters can fix the qualification and fighting style of the imported boxers to fight with Thai boxers in their camps in warm up bouts, as well as fixing the fighting result, he said. Therefore boxers should not be blamed alone for having substandard fighting, he said.

But he believed that Japanese promoters would continue to import Thai boxers to fight in Japan because Thai boxers remain acceptable among Japanese fans. He went on saying that Thai boxers needed to get approval from the Professional Boxing Association first and to the Office of the Boxing Commission for final permission.  Source: Thai PBS 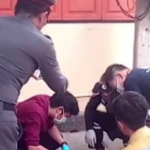