A police officer who took his life at Royal Thai Police (RTP) office on Sunday committed suicide over personal affairs and not work stress.

This was what the police investigators believed after Pol Maj Sahasawat Phanket shot himself at his office inside the Personnel Office of the Royal Thai Police. He left a note which reads “please forgive me, I’m so much in depress.” A 9mm pistol lied on the floor by the bed which he stayed overnight.

Deputy commissioner of the RTP Pol Gen Chalermkiat Srivorakarn said from the letter he wrote, it indicated that work stress was not the reason for his suicide. Besides, investigation with colleagues and superior showed no work pressure was pressed upon the officer on promotion list.

Investigators will await autopsy report from doctors before they could conclude the case, he said. But he admitted that most police officers suffering from depress over personal matters, not work stress.

This prompted the national police chief Pol Gen Chaktip Chaijinda ordering senior police to look after their subordinates closely and also set up an emergency line 1599 to serve as consultant in personal affairs for police in trouble.

A chief investigator Pol Lt Gen Chaiwat Ketworachai said it was preliminarily concluded that the officer took his own life. Source: Thai PBS 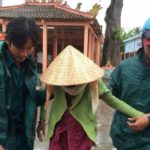