An alleged bitcoin robbery at a condominium in Phuket on Monday has left a Russian couple without THB3.5 million in cryptocurrency, they claim. Today, a few more details of their alleged abduction, as well as their photo, have come to light.

The couple reported the alleged robbery to Lt. Chanat Hongsuttichaikun, of the Chalong Police, on Wednesday.

The victims were Russian nationals Maxim Lastovka, 27, and his girlfriend, Anna Nikulina, 22.

It is alleged that suspects broke into the condo at The Lago Naiharn Beach on Monday and stole items including a MacBook, MacBook Pro, HP notebook, iPhone X, at least one Visa credit card issued in Russia, two passports, and the equivalent of about US$100,000 in Bitcoins. They also allegedly held the couple for six hours.

The suspects then forced the couple to transfer the Bitcoins to another account via a computer and told them that if the Bitcoins were not transferred, Lastovka would be killed and if they went to the police, the suspects would return and inject the couple with drugs. It is still unknown how they knew that the couple owned bitcoin.

Due to the threats made against them, Lastovka was afraid to tell Phuket police. However, Phuket Tourist Police have a Russian volunteer working with them, Igor Protasov, and they felt comfortable talking to him.

The couple brought a Russian police volunteer to their condo where the theft allegedly happened.
Since yesterday, police visited the condo complex where the couple was staying and reviewed CCTV footage. They are still in the process of finding clear CCTV footage of the suspects.

“We have some footage that is potentially of the suspects, but it is from from the outside of the building. They appear very briefly, flashing in and out of view, so it is uncertain at this point,” Lt. Chanat explained.

“The suspects might be Russians as well since we believe they followed Lastovka and his girlfriend. They also knew about Bitcoins the couple had.

The officer wondered if the suspects could have even been friends of the couple.

“We are investigating the incident and have contacted Immigration Police to track down the suspects in order to bring them to face legal action,” Lt. Chanat concluded. 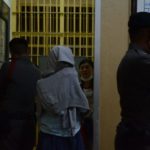 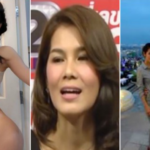