A group of illegal immigrants annoying tourists by begging and selling garlands have been rounded up by Pattaya police.

Reports suggested that ten immigrants had been arrested though a picture taken at Pattaya police station showed more.

The group in the photo were seated in front of a sign that said in English: “The performance of important case (sic)”.

Reports said that damaging the resort’s image on this occasion were a “gang” of illegals who had crossed into Thailand at Sa Kaew and been brought to the resort. Their controller was being sought as the inquiry widened.

Pattaya station chief Apichai Kroppetch was on hand to say that one of those arrested was 26 year old Vietnamese flower seller Tran Tai Lai who was apprehended with six bunches of flowers and 200 baht.

Five more were just plain beggars from Cambodia. Evidence gathered in their cases included three plastic cups, one half of a coconut shell and a plastic “khan” or small water dipping bucket usually used for showering

This was being used as a money collecting vessel.

Four more illegal immigrants were rounded up as part of the gang.

After processing they will all be send back home.

Apichai said that he was acting on orders to clean up the resort. 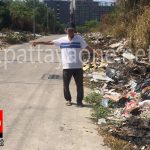