The Bang Tho Rad police station was alerted of the shooting at a house in Tambon Chaimongkol in Muang district at 6.30am.

Panthip (surname withheld), 45, was found with gunshot wounds to her stomach and right wrist and died at the scene.

Her son, Amornthep (surname withheld), 21, told police that the gunman was his father, Thanapon, 46.

Thaworn told police that she stayed with Panthip to help her take care of her elderly mother.

Thaworn said she heard gunshots, ran to check and found Panthip lying on the floor. Thanathorn then turned the gun on her but the bullet only grazed her cheek. She played dead as Thanathorn walked up and tried to shoot her two more times, but the gun jammed.

She said she saw Thanathorn drink herbicide and speed off on his motorcycle in the direction of Ban Paew district. 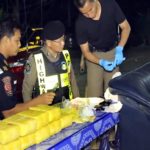