SUNDAY’S election saw some shocking results with long-time political heavyweights knocked out by novices in their traditional strongholds.

The Democrats, considered unbeatable in Trang’s Constituency No 1, the home province of its revered former leader Chuan Leekpai, were beaten by the Phalang Pracharat Party, whose candidate Niphan Sirithorn, a former governor of the southern province, snatched it from Democrat veteran Sukij Attopakorn.

Constituency 1 was regarded the “capital” of the Democrat Party. Sukij attributed his defeat to several factors but said the main factor was a party formed by former Democrats snatched away a lot of his votes, handing the victory to the Phalang Pracharat candidate.

Chuan, who twice served as prime minister, is greatly admired and no Democrat candidate who contested with his blessing could have lost in earlier days.

A dejected Sukij said yesterday that he would wash his hands of politics.

The Democrat Party also suffered reverses in Phuket, where it surrendered its monopoly, losing two House seats to the junta-aligned Phalang Pracharat.

Another Democrat heavyweight biting the dust was Warong Dechgitvigrom, in his stronghold Phitsanulok, beaten by Future Forward novice Pradipat Santipada.

Warong blamed his party’s wrong strategies for the defeat.

Before Warong spoke to reporters at the party office in Phitsanulok, he posted a message on his Facebook wall, blaming former Democrat leader Abhisit Vejjajiva for the humiliating defeat.

Without naming any names in the post, Warong made it obvious he was referring to Abhist.

Abhisit resigned as Democrat leader on Sunday night after he learned that his party had got fewer than 100 House seats. According to unofficial results yesterday, the party managed to get only 55 MPs elected.

When Abhisit was re-elected Democrat leader after overcoming a challenge from Warong, he promised to resign if the party failed to win at least 100 MP seats.

In the post, Warong said the captain had made many mistakes in steering the Democrat ship.

“This time, the ship did not just have ruptures or a damaged hull, but the entire ship sank, becoming a wreckage.

Warong said the captain had made wrong decisions in setting the ship’s course.

“He did not fight with the old enemy but he made a new enemy of someone he should have allied with. He played the game of others while we did not have enough force. So he infuriated the audience who have the power to vote. Eventually, the people punished us,” Warong said in the post.

Ittipol and two other Phalang Pracharat Party candidates allied with him were beaten by three Future Forward candidates in what were seen as David vs Goliath fights.

Because of his influence, Ittipol, the former mayor of Pattaya City, was assigned to be Chon Buri election director and tasked with managing the campaigns in constituencies 5, 7 and 8.

All three constituencies were captured by Future Forward candidates.

The Kunplome family is influential in the eastern seaboard region, especially Chon Buri. The Prayut Cabinet earlier appointed Ittipol’s brother, Sontaya Kunplome, as an adviser to the prime minister.

Political observers believe Ittipol and his two candidates were beaten by the Future Forward candidates because Ittipol underestimated the pull of his rivals and his overconfidence led to complacency in campaigning.

In Constituency 1, Pheu Thai’s Samart Kaewmeechai, who has served several terms as MP, was toppled by Future Forward’s Ekkapop Pianpiset in a close contest.

Ekkapop, who had resigned his position as a doctor at a private hospital in Chiang Rai to contest the election, got 28,916 votes while Samart received 27,048.

Phiradej was a businessman who ran a hotel and a restaurant in Chiang Rai’s Mae Sai district, and was also involved in the real-estate business before joining Future Forward.

He said he had not expected his victory because the constituency had a veteran politician with a strong political base.

Now that he had won, he said would do his best as an MP.

In Khon Kaen, two veteran former MPs of the Pheu Thai were beaten by candidates of Future Forward and Phalang Pracharat.

Jakkarin congratulated Thitinan when they met at the Khon Kaen election office.

In Constituency 2, Orn-anong Sarapol of the Pheu Thai, who had won the seat there several times was beaten by Wattana Changlao of Phalang Pracharat.

A little-known candidate of Future Forward, Sanchai Thakong, got 21,139 votes. 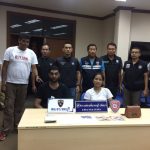