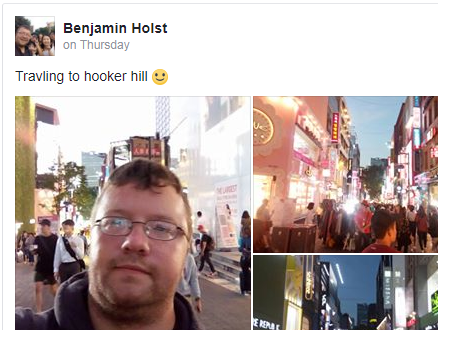 A German, who was famously blacklisted from Thailand after begging for money before blowing it all in Pattaya is up to his old tricks, in Korea.

Big leg is back up to his old tricks in South Korea, talking about begging, posting pictures outside girly bars, and saying he is going “looking for girls” on his Facebook page.

He landed in Seoul on Wednesday, after being denied boarding on a flight bound for Laos, with a layover in Bangkok. He has been banned from entering Thailand since 2014.

Benjamin Holst is the notorious big-legged beggar who asks for cash from good-hearted Thais and parties the money away with bar girls in Pattaya. It doesn’t appear that much has changed. As soon as he landed in Seoul, he wrote that he was going looking for women after checking into budget accommodation Hotel Nostalgia.

The man has a medical condition that causes his leg to swell up like a balloon and he uses the look of this disfigured limb to gain sympathy and money from people across Asia.

There are rumors that he can actually keep this condition under control with medicine and diet but chooses not to so he can live an easy life, boozing and paying women for sex.

From his photos and updates it appears that Holst’s stops in Seoul included “Hooker Hill” and several strip clubs.

When asked about begging, he wrote, “Money flies easy to me. Make smile, put cup on the street and 1-2 hours later $200.”

Most of us in Southeast Asia may be safe for the moment though. When one of his Facebook friends asked him how long he planned to stay in South Korea he wrote, “89 days or when police deport him.”