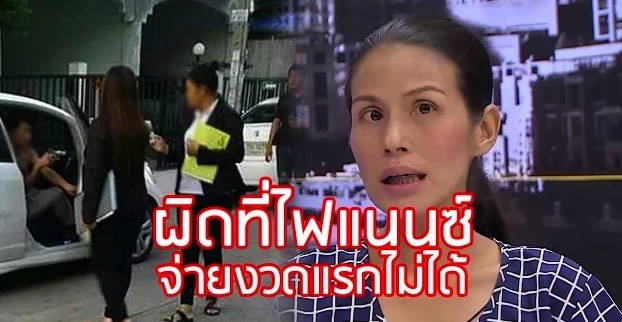 The man who pulled out a gun to threaten staff of a bank who came to repossess his wife’s car turns out to be a cop.

Last Friday he was caught on tape wielding a gun as he drove off outside his house as terrified bank employees were left standing in the street, reported Manager.

Ekarat was bare chested without shoes.

The incident happened at the Tawana housing estate in the Sai Mai area of Bangkok late last week.

Now his wife has gone on television with a withering sob story about all the problems she and her husband have faced recently.

And now she has claimed that she was scared by the bank employees – two women and a man – who arrived to take back the Honda Jazz that was two years behind with the payments.

She claimed the employees had not had ID so she phoned her husband who was sleeping upstairs to come down. He thought she was under threat, she said, and so came with his gun.

She didn’t know what happened then because he told her to go inside.

But footage posted online clearly showed the policeman brandishing a gun and fleeing in the car in question.

Wife Noppawan Jeera said that the car was in her name. After her mother came to stay and got sick she ran out of money and refinanced the car and didn’t pay the installments, she said on TV as she sobbed.

She didn’t tell her husband what she had done until later.

She came up with a story about trying to pay at 7/11 and then the bank but it wouldn’t go through and one thing led to another then it was two years, now her and her husband were in this mess and the neighbors won’t speak to them and she had to borrow money for her mum’s funeral from friends, she went on.

And when they came to repossess I was scared, I was all alone after going out in the car, they had no ID, I felt threatened, I didn’t know what to do, there was no one else about, so I called my husband to come and help, she continued.

She mentioned that she didn’t gamble, her husband gives her 1,000 baht every two days, she looks after the two kids. And now she has her husband to worry about.

Manager, who reported the interview from Amarin TV on their “Tang Khon Tang Khit” (different people different views) show, made no mention of what has happened to the policeman husband waving the gun. 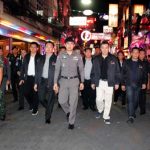 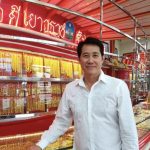