Home » How to cash in on genocide tourism 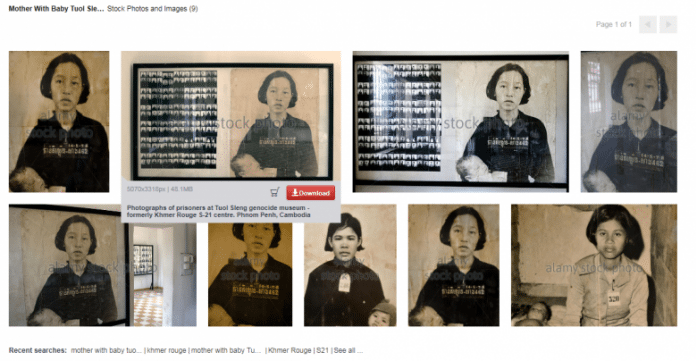 Genocide Tourism: A woman with short-cropped hair stares directly into the camera, her head cocked slightly to the side. On her lap is a sleeping infant just barely in the frame.

The woman was the wife of a Khmer Rouge officer who fell out of favour, and one of the thousands of prisoners at S-21 whose photograph was taken on arrival at the infamous torture centre.

Shortly afterwards, her baby was taken from her and killed. The portrait is among dozens of S-21 photographs for sale by at least two international stock-image companies.

For $199.99 a business can purchase this image of the mother and her baby from UK-based photo site Alamy for use in a “marketing package”.

The webpage notes that no model release form was signed by the subject of the image.

Alamy is not alone – at least one other company, US-based Sprague Photo Stock, is also selling S-21 prisoner intake portraits on its website.

Regional magazine Mekong Review first called attention to the sale of the portraits on Tuesday, and in several tweets called into question the practice of selling the images for commercial use on legal and moral grounds.”These portraits were taken by Khmer Rouge cadres, before they tortured and killed these people. This is wrong,” they wrote on Twitter.

The photos being sold on both stock-image sites appear to have come from photographers who took them while inside the museum where the images are displayed.

The museum forbids visitors from capturing any pictures while inside the former prison, and it is unclear if the photographers were visiting with press permissions.

The director of the Tuol Sleng Genocide Museum, Chhay Visoth, said he was not previously aware that these photographs were being sold online.

“Selling or using the victim’s pictures for commercial purposes is legally and morally unacceptable because they were already victimised in that regime, and they should not be victimised again by such selfish purposes,” Visoth said.

Youk Chhang, the director of the Documentation Center of Cambodia, and a Khmer Rouge survivor himself, said in a message to The Post that the sale of the photographs “is very perplexing”.

“It is a memory of the nation and should be properly used with respect.”

Youk noted that these photographs have been copied and disseminated widely for educational purposes, in part to keep the memory of victims alive.

“Documents and photographs of the regime have been duplicated and flooded across the globe because we as the victims want to tell the world of the millions of Cambodians who have perished brutally under the Khmer Rouge. And we want justice for both those who have passed away and those who have survived the regime,” he said.

Nonetheless, who uses the photos, and for what purpose, is a major concern. As an example of proper use, Youk cited his own organisation’s archive of S-21 prisoner photographs, created with permission.

Neither Alamy nor Sprague responded to requests for comment, though the formerappeared to be in the process of removing the photographs from its site on Friday.

One of the photographers that Alamy credits for the S-21 prisoner portraits, John Lander, said via email that he would take the image down as it “shows peoples’ faces – which I can well imagine are sensitive to some people”.

A screenshot from the Alamy website featuring S-21 prisoner portraits.

This isn’t the first time the question of ownership of these harrowing photographs has been raised.

The original photographer who took many of the portraits, a former low-ranking Khmer Rouge cadre, is still alive and contends the rights should be his. Nhem En, now 58, worked as a photographer for three years at S-21, and it was his job to capture images of the prison’s detainees.

“I took those pictures so the copyright should belong to me, but copyright just does not matter in Cambodia,” he said. “My pictures are used by media all over the world, but no one give me credit for that. Foreigners may not know about me, but the government should do something about it.”

“If anyone owns them, it’s the people of Cambodia. If those companies had sought and were given permission by the Cambodian government to sell them, then they’re legally clear,” he said. “But if they haven’t, then they’re simply thieves, or grave robbers. You can’t sink any lower than this.”