A man died from a heart attack at a Thai gaming cafe and was slumped at the keyboard for four hours before anybody noticed.

Natsupon Arunrat, 32, started his session at 4am and was found dead in front of the computer screen at the internet cafe in Samut Prakan, central Thailand on Saturday evening.

She noticed that he did not get up and walk around to relax like he normally did, so she walked by to check on him.

When he didn’t respond, she assumed he was ‘concentrating on the game’ and walk away.

Incredibly, the other gamers in the cafe – who must have barely lifted their eyes from the screen – didn’t notice that the man slumped at a keyboard was dead.

The owner, who has not been named, said: ‘I walked behind him and spoke to him but he didn’t answer. I thought he was paying attention to the game.

‘The guy sitting next to him also said that he just saw him walking to turn off the air conditioner, so I let it go and went back to my seat.’

After around four hours the owner realised the customer was laying back on the chair very still and that his stomach was not moving.

Natsupon was already dead when the staff were moved him onto the floor, his mouth covered with blood from biting his tongue.

The cafe owner immediately called Natsupon’s mother and reported the incident to the Samut Prakan police.

Natsupon’s mother told the police that her son could not work because he had too many health conditions, so liked to spend the day at the computer shop.

She said: ‘He had been suffering from heart disease and high blood pressure for many years. He was very bored and computer games were the only thing that made him happy, so I didn’t stop him.

‘I knew he’d been addicted… but I didn’t know that it could kill him.’

Police presumed from preliminary investigations that Natsupon spent too much time at the computer all day and did not have enough rest, causing recurrent cardiac arrest and death.

Existing health conditions may also have contributed, police said. His body was sent for an autopsy at the Institute of Forensic Medicine to finalize the cause of death 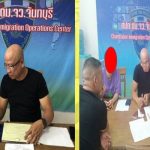 Reminder: Foreigners will be fine for not reporting 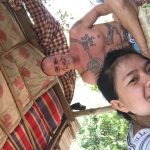