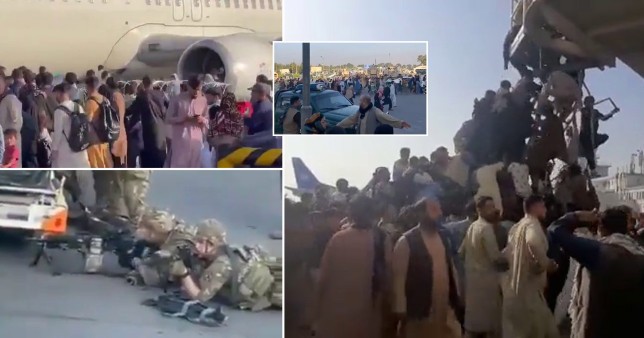 Five people are thought to have died during desperate attempts to flee the Taliban, amid chaos at Kabul airport.

The Taliban were reported to be taking ‘potshots’ at airplanes leaving the Afghan capital, but that is not thought to be the reason behind the deaths.

Pictures showed people clambering onto an elevated gateway to reach planes, with a number of casualties seen collapsed on the tarmac below – which Sky News linked to five deaths.

There was pandemonium on the civilian side of the airport, where hundreds crowded around non-military planes as the Taliban rapidly captured the capital.

The British Government has admitted it could take weeks to get everyone out, while locals made increasingly desperate attempts to flee the Islamist militants.

The President has fled Afghanistan, while US military helicopters have been whisking diplomats to the airport, where many are holed up in scenes compared to the evacuation of Saigon during the Vietnam War.

Sam Lerman, a US Air Force veteran struggling to find a way out for an Afghan contractor who had helped allied forces, branded the situation ‘murder by incompetence’.

Meanwhile, British Defence Secretary Ben Wallace acknowledged on Monday morning that the Taliban are in control of the country but ruled out returning troops.

Mr Wallace hinted it would take weeks to evacuate everyone the Government wants to help but appeared to suggest there could still be hope of getting ‘everyone’ out.

He told BBC Breakfast: ‘If we can manage to keep the airport running in the way we are putting in place our people to deliver then I’m confident that by the end of the month we could get everyone out and actually hopefully sooner.

‘There will be some people left behind, we made that clear in the last few weeks, I’m not going to raise expectations.’ 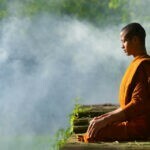 Monks open their doors to those suffering from the pandemic 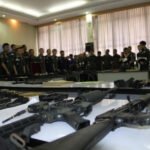