On September 8th, Thai Police finally made the arrest of 2 drug dealing monks who had been supplying addicts in a local rehab centre.

Yesterday, officials raided a temple in the central province of Nakhon Nayok to arrest an abbot and his assistant for selling drugs to the patients they were supposed to be helping at their self-styled Buddhist rehab center.

Narcotics, food and drug, and military officials conducted the operation and arrested assistant Suwanchote Imsamai, 43, and abbot Suwan Wongsricha, 61, at Wat Khao Permsawangknown. The abbot had been known as Phra Khru Opasthamchote before he was defrocked, reported Thai PBS.

Officials were acting on tips from people living nearby that the center for addicts was actually housing people getting high. The “traditional medicine” that the temple sold to patients for THB100 (USD3) was actually a liquid medication fortified with caffeine and methamphetamine.

The Office for the Narcotics Control Board (ONCB), began their investigation last month when they sent an undercover agent to the temple to pose as an addict wanting to stay there and recover.

He was accepted by the two drug-dealing monks and asked to pay THB500 (USD15) to register and THB100 (USD3) for each bottle of medicine. When the medicine was tested later it was found to contain methamphetamine, as suspected.

The same test was carried out on 11 more bottles.

An arrest warrant for the two monks was arranged on Sept. 7, just hours before the raid.

When they checked his background, they learned that Suwan had already been arrested, defrocked, and done prison time for drug offenses very similar to what was happening in Nakhon Nayok. After his release, he opened another “rehab” center.

Until recently, these sort of escapades by monks, who were defrocked for bad behavior and then re-ordained elsewhere, were hard to trace since the holy men carry only paper identification that is easy to forge. However, the government has recently proposed chip-encoded “smart-monk” cards that make monks as traceable and accountable as anyone carrying a government ID. 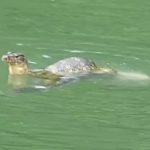