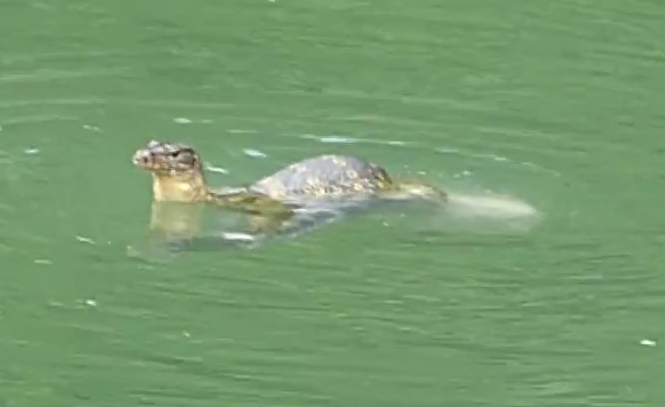 A monitor lizard bit off more than it could chew while grappling with this enormous fish.

The amphibious reptile snared the ‘giant snakehead’ fish for breakfast in Temenggor Lake in Perak, Malaysia.

But the greedy water lizard struggled to get to grips with the creature as it splashed around in the water.

Onlooker Alicia Mena, who recorded the footage, said the lizard spent 20 minutes tearing chunks of flesh from the fish.

She said: ‘’The lizard eventually finished eating the fish, but he definitely had problems with the size.

”I think it is rare to catch a fish that big so it might have already caught it while it was dead in the water. A crocodile might have killed the fish first and the lizard stepped in to grab it.

‘’I do like the idea of an underwater fight between the monitor and the fish though.

‘’Not only could the lizard float and swim, he was enjoying the meal, too.’’