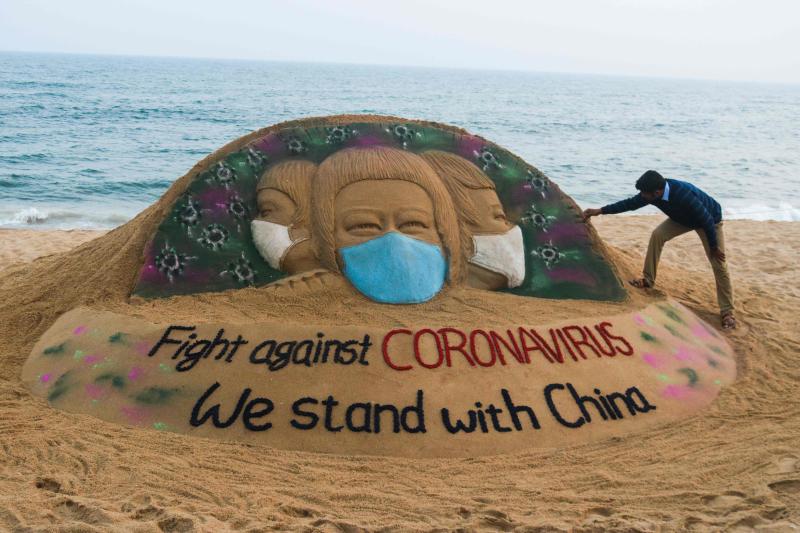 –China’s Hubei province has removed two health officials from their posts, according to state television, as the death toll from the coronavirus climbed above 1,000

Singapore could see a 25% to 30% decline in tourist arrivals and spending this year because of the coronavirus outbreak, as the industry braces for a worse impact than the 2003 SARS pandemic, the city’s tourism chief said.

The city-state is losing about 18,000 to 20,000 tourists a day, and the figures could plummet further if the situation persists for longer, Keith Tan, chief executive of Singapore Tourism Board, said in an interview.

China accounts for about 20% of Singapore’s tourism intake, the biggest source of visitors ahead of Indonesia and India. China’s ban on outbound tour groups and Singapore’s move to bar Chinese nationals from entering has led to an “evaporation” of a key source of revenue, Tan said.

Criticism has mounted over China’s transparency and speed in handling the epidemic. The government’s struggle to stem the outbreak has fuelled concerns about President Xi Jinping’s efforts to centralise power since taking office, with officials pointing fingers over who’s to blame for the spread of the illness.

The death last week of a 34-year-old doctor, Li Wenliang, who was sanctioned by local authorities after warning about the disease, unleashed a torrent of grief and anger on social media.

Thailand says ship won’t be allowed to disembark (7.56am) 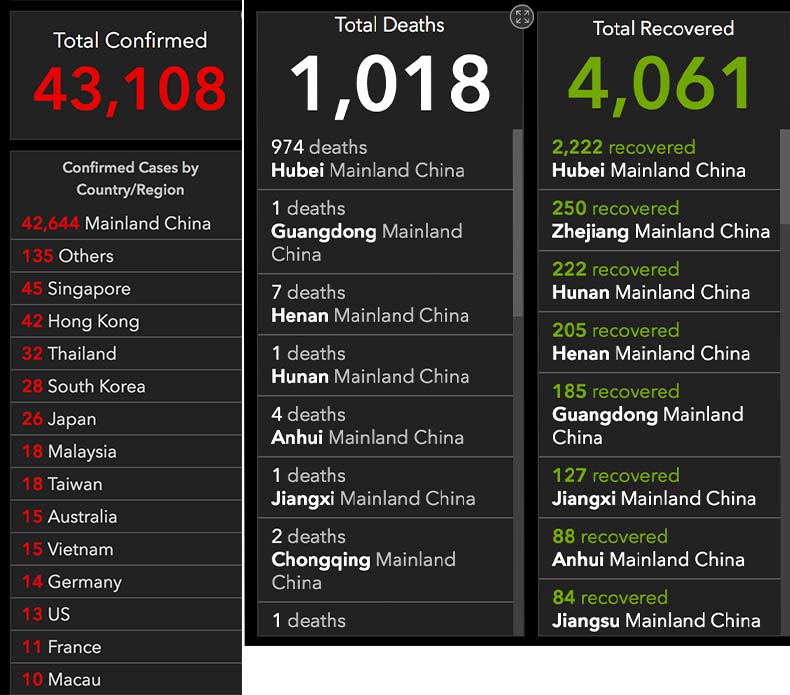 Passengers from a ship that has been blocked from other ports due to virus concerns won’t be given permission to disembark in Thailand, Health Minister Anutin Charnvirakul said in a Facebook post.

The Westerdam cruise ship, operated by Carnival Corp’s Holland America, has been refused entry by a number of nations over fears that passengers may be carrying the coronavirus.

The ship departed Hong Kong on Feb 1 with 1,455 passengers and 802 crew. It is set to arrive at a port near Bangkok on Thursday, and checks with health authorities indicate there is “no reason to believe there are any cases of coronavirus on board the ship,” Holland America said in a statement Monday.

Elderly may be released from Japan ship: Kyodo (7.32am)

The number of coronavirus infections among those aboard the Carnival Corp ship quarantined off Yokohama has nearly doubled to 135, making it the biggest centre of infection of any place outside of China.

Risks are mounting that the virus could spread further in the confined spaces of the ship, where many on board have increased vulnerability due to their advanced ages.

More than 100 people at a public housing estate in Hong Kong were evacuated in the early hours of Tuesday after two people in the tower were confirmed to have contracted the novel coronavirus, South China Morning Post reported.

The move was precautionary after a 62-year-old woman, who lives several floors directly below a man who had earlier confirmed with the virus infection, became the 42nd cases in Hong Kong, according to the report.

The death toll in China from the coronavirus rose to 1,016, with the addition of 108 fatalities for Feb 10, according to the National Health Commission. Hubei, the province at the centre of the outbreak, reported 103 more deaths, its highest daily count so far.

While the total confirmed cases in mainland China climbed to 42,638, Hubei reported 2,097 new infections, the smallest daily increase since Feb 1.

Most cases and deaths in China are in Hubei. Large parts of the province have been cut off from the rest of China since the government started imposing a quarantine on Jan 23 to try and stop the spread of the virus.

Two additional deaths have occurred outside of mainland China: one in Hong Kong and the other in the Philippines.

Ford Motor Co has resumed production at its Chinese plants, a spokesman said.

The US automaker is working with its supplier partners, some of which are located in Hubei province, to assess and plan for parts supply, according to Anderson Chan, a spokesman.

Ford was among the major automakers that halted production at China plants late last month as the government extended the traditional Lunar New Year holiday by a week.

Tesla Inc. also reopened its plant near Shanghai on Monday.

The mortality rate from the coronavirus is an estimated 1%, researchers at the Imperial College London said in a new report that attempts to account for mild cases as well as more severe ones at the centre of the outbreak in China.

Researchers have been trying to estimate how severe the virus is, and to calculate how fast it spreads as well as how many people get severe illnesses or die. In China’s Hubei province, where the outbreak began, the fatality rate may be 18% for patients with severe symptoms, the researchers calculated.

“The impact of the unfolding epidemic may be comparable to the major influenza pandemics of the twentieth century,” Neil Ferguson, an infectious disease researcher at Imperial College London, said in a statement.

The researchers said the 1% mortality rate was an estimate of what will happen once all cases are counted, and after previously undiagnosed ones drive the rate down.

Any estimates ”should be viewed cautiously” given the numerous uncertainties involved, the researchers warned in in their report. Mortality rates tend to shift in the middle of an outbreak as new and milder cases are found.

The UK researchers estimated that the typical time between onset of symptoms and death has been about 22 days, meaning that there may be a multi-week time lag between reporting of cases and when deaths from those cases become apparent.

Overall, the Imperial College London researchers estimated that 1.3% of Wuhan residents were infected with the virus as of Jan 31, but only 1 in 19 of them were being tested for the virus – suggesting that the actual number of cases could be far higher than the official numbers indicate.

The CEO of one the world’s largest toymakers said many of its largest Chinese suppliers remain shuttered because of the coronavirus outbreak, with some pushing reopening dates back to the end of next month.

While the idled factories haven’t had a major impact on MGA so far, prolonged closings could delay orders for the holiday-shopping season, according to Larian. China is by far the biggest maker of toys, with the industry’s hub in Shenzhen, and February and March is when factories do the bulk of production for Christmas goods that hit shelves beginning in late October.

Britain imposed new regulations allowing health authorities to keep individuals in quarantine if they’re considered to be at risk of infecting others. The move came as the U.K. government called the novel coronavirus a “serious and imminent” threat to public health.

The rules apply to anyone seeking to leave isolation before a 14-day quarantine is complete and will be in place for future cases, the government said Monday. Four more patients in England tested positive for the coronavirus, bringing the total number of cases in the UK to eight. The country has also flown back Britons from the virus epicentre of Wuhan, China, and they’re now being held in quarantine.

Chinese President Xi Jinping made his first public appearance after the death of a doctor who became a hero for speaking out about the deadly coronavirus sparked public anger.

Xi visited the Chaoyang district in Beijing Monday afternoon “to learn about the situation of epidemic prevision and control at the grassroots level,” according to state-run media Xinhua. The agency published photos of Xi wearing a mask and having his temperature taken.

It was the first time Xi interacted with the public since a trip to Yunnan province from Jan. 19 to Jan 21, part of a tradition the country’s leaders have of touring smaller towns and cities ahead of the Chinese New Year holiday. The president was last seen in public when he met with Cambodian Prime Minister Hun Sen on Feb 5.

Hon Hai Precision Industry Co has told some employees at its main iPhone-making unit that it’s postponing the resumption of production. Hon Hai, known also as Foxconn, sent a message via its internal app on Sunday that it wouldn’t be able to decide on a back-to-work date “until further notice” for its iDPBG business unit, according to a version reviewed by Bloomberg News. That division makes gadgets for Apple at a factory in the so-called iPhone city of Zhengzhou and two other plants in Shenzhen. 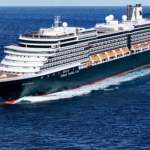 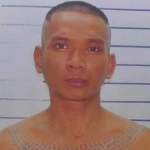 Prisoner due for release escapes from prison