Home » Collision kills one, hurts another in Phitsanulok

Two cars collided on Highway 117 in Muang district of this lower northern province on Sunday, killing the driver of one car and seriously injuring the other, police said.

A police investigation revealed that Samroeng Chanthornrak, 41, of Phitsanulok’s Wat Bot district, was driving a Toyota Vios along the out-bound side of Highway 117 at kilometer marker 123 when his car collided with a Mercedes Benz driving against the legal traffic flow.

Both vehicles were badly damaged in the violent head-on collision. The accident happened five minutes after midnight.

Samroeng was seriously injured and later pronounced dead at Phra Phutthachinnarat Hospital while Attharot Thong-ngamkham, 35, the driver of the Mercedes Benz, suffered head injuries and bruises all over his body.

Police were investigating witnesses and checking footage from security cameras in the area to establish the cause of the accident. The driver of the Mercedes Benz, who was being treated in an intensive care unit at the same hospital, would undergo an alcohol test to find out whether he was driving under the influence, police said. 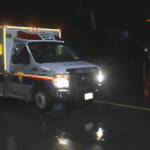 ‘WE WILL NOT RETREAT,’ THANATHORN SAYS AT PROTEST, PROMISING ANOTHER NEXT MONTH