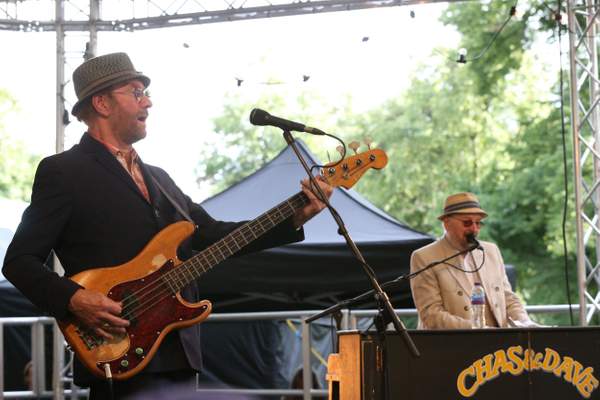 Chas Hodges, known as half of the pop rock duo Chas & Dave, has died aged 74.

A statement was posted on the duo’s official Twitter account which said Hodges had suffered from organ failure following cancer treatment, and “passed away peacefully” on Saturday 22 September.

“It is with tremendous sadness that we announce the passing of our very own Chas Hodges,” the statement read. “Despite receiving successful treatment for oesophageal cancer recently, Chas suffered organ failure and passed away peacefully in his sleep in the early hours of this morning.”

Cockney musical duo Chas & Dave were synonymous with light-entertainment TV in the 1980s.

Hodges was born in Edmonton, London in 1943. Together with his musical partner Dave Peacock, he enjoyed the height of Chas & Dave’s fame in the 1970s and 1980s with hits such as “Rabbit” and “Snooker Loopy”.

They achieved a major breakthrough with “Gertcha” in 1979, which peaked at No 20 in the UK singles chart  – the same year they opened for Led Zeppelin at Knebworth Festival

The duo were also prominent session musicians – the hook used on Eminem’s hit track 1999 “My Name Is” was taken from a Labi Siffre tune, “I Got The…”, on which Chas & Dave performed

In April this year Chas & Dave released A Little Bit of Us, their first album featuring new music in more than 30 years. It included a track that addressed Hodges’ cancer diagnosis.

“This is our first Chas & Dave-produced album for over 30 years,” Hodges said in a statement. “Tell you what, though, we ain’t waiting another 30 years before we do the next one. The older you get, it seems time goes quicker.

“Yet as soon as we got in the studio it seemed like yesterday that we were producing our last album. My mum used to say the same thing in 1960: ‘Thirty years ago I was 17 and it seems like yesterday.’ ‘How can 30 years ago seem like yesterday?’ says I, slightly mockingly. ‘Well it bloody well does’, says mum, getting the deserved last word, and that’s that.”

They played to a sold-out London crowd in July at BST festival, supporting headliner Eric Clapton, but were forced to cancel shows in September due to Hodges’ illness.

After stints playing with with Mike Berry & The Outlaws, Ritchie Blackmore, and Cliff Bennett and the Rebel Rousers, Hodges joined Albert Lee’s cult band Heads Hands & Feet, before playing with Peacock and Lee in Black Claw.

Tributes from fans, music writers and fellow musicians have flooded in for the late artist.

Music critic Simon Price tweeted: “I don’t know if I’ve ever had as much shameless fun at a gig as last time I saw Chas & Dave. And Chas Hodges in the atrium of Alexander Palace was way better than The Libertines (who booked him to be there). He also played on any number of Joe Meek classics. What a guy. RIP.”

The official Spurs Twitter account wrote: “Everyone at the club is deeply saddened to hear of the passing of one of our own, Chas Hodges. Our thoughts are with his family and friends at this difficult time.”

Comedian Sir Lenny Henry tweeted: “What a shame. When they were on Tiswas they were always kind, respectful and played live. RIP Chas.”

Comedy writer and author Adam Kay tweeted: “Sad news. The very least we could do in Chas’s memory is make ‘Ain’t No Pleasing You’ the new national anthem. Belting tune.”

Comedian Rob Beckett said Chas & Dave had written “the soundtrack to my childhood”.

‘No room at the morgue’: Horror in Mexican city as 157 corpses stored in truck parked in suburb