Home » Claire Johnson, Australian woman who begged social media and the Australian government for assistance after a 111 day overstay, allegedly worked as an escort in Thailand.

An Australian woman who overstayed her visa by more than 100 days was scheduled to be released and deported from Thailand last evening. She is believed to be back in Australia, although Thai officials have not confirmed this to the press.

Claire Amelia Johnson, 46, was born in Sydney but most recently lived on the Gold Coast. Thailand’s immigration chief, Surachate Hakparn, had said Ms. Johnson was due to leave Bangkok Thursday night on a Qantas flight scheduled to arrive in Sydney on Friday morning.

But she did not take that flight and instead was rescheduled to depart at 6.30pm Friday evening and arrive in Sydney at 7:50 AM on Saturday on Thai Airways flight TG475.

Thai police Colonel Thatchapong Sarawanangkul, the chief of the Immigration Detention Centre where Ms Johnson is beging held, said on Friday morning that Ms Johnson had chosen to stay in detention for one extra day.

“I don’t know why she didn’t fly [Thursday evening]. We said when do you want to fly? She had to buy her own ticket, she has [now] bought her ticket. She is still in the detention centre, waiting for the bus to take her to the airport [later on Friday],” he said.

New information surfaced on Friday evening that was reported on Thai social media, however, that concerned many Thai citizens. A post from escort website Smoochi appeared to show that Ms. Johnson, who has publically said she works for a cosmetic tourism company, was allegedly an escort during her time in Thailand and used the funds to travel the world. Additionally, the cosmetic tourism company she works for was delisted as a registered business in Australia over a year ago according to multiple Australian media reports.

Neither the Thai government nor Ms. Johnson have made any public comments on the alleged photos being shared on social media. Smoochi has not responded to a request for comment. 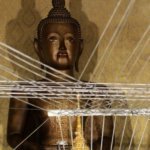