They were charged for begging on the street, an offence under the Beggar Control Act 2016 which is punishable with up to one month in jail and a fine of Bt10,000.

Police found they were using tourist visas and reportedly over-staying for several months. They allegedly stayed together at a hotel in Soi Inthamara.

Police said they would bring large amounts of coins to change into notes at convenience stores in the area before splitting the proceeds among themselves at the hotel. 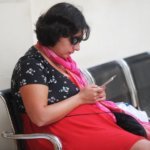