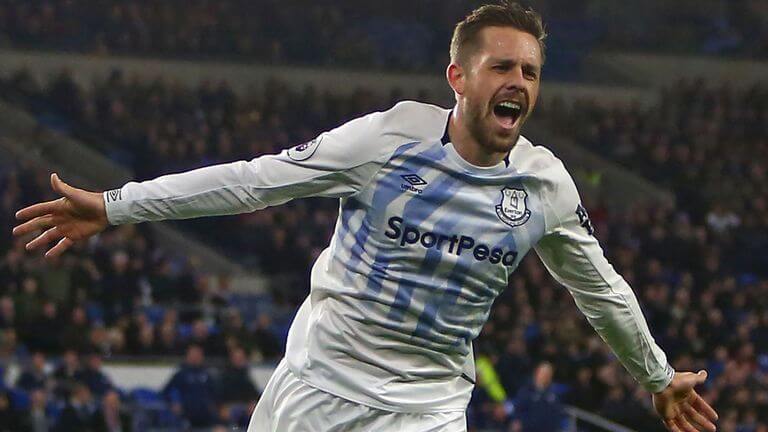 Reykjavík born 29 year old Icelander Gylfi Sigurdsson spent two spells in the Welsh valleys with Swansea City and he’s doing his best to make sure his old team and Cardiff enjoy their rivalries in the Sky Bet Championship next season. He also scored the winner at Goodison Park. Neil Warnock, who’d never lost at home to Everton, has now and that’s two big home losses in a row against teams who Warnock might have believed he could have got something.

Phil Jagielka, sent off in the first game of the season at Wolves at 39 minutes, returned for Everton after only playing another 14 minutes all season at Chelsea back in November. He made a big mistake in the second minute as  Kenneth Zohore latched on to his poor back pass. Zohore’s cross looked like leaving Nathaniel Mendez-Laing with a simple tap in but Everton’s Lucas Digne nipped in to clear the danger.

Etheridge could do nothing on 41 minutes when Seamus Coleman, made one of his trademark surging runs down Everton’s right where he cut the ball back to Sigurdsson to side-foot home with his right foot from 12 yards.  On 66 minutes Everton’s substitute Bernard, on for fellow Brazilian Richarlison after 61 minutes, made a similar run down Cardiff’s right. From his cross, Etheridge could only palm the ball to Sigurdsson who finished in fine style with his left foot from a similar distance as his first.

In the 90+ 3rd minute Dominic Calvert-Lewin made it three from the edge of Cardiff’s ‘D’ after good work by Idrissa Gueye.

Man of the match: Gylfi Sigurdsson