Home » Bikini or no bikini: The big question in Vietnam 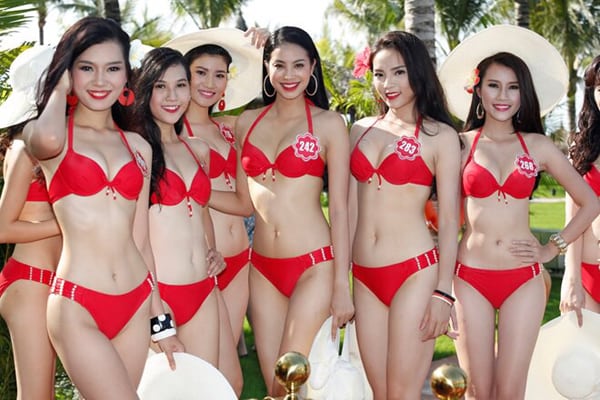 Organizers of beauty contests in Vietnam pick up cues on ‘true beauty’ from Miss America counterparts.

Culture authorities in Vietnam plan to collect opinions on whether or not the swimsuit segment should be dropped from beauty contests.

Le Tuan Minh, deputy head of the Agency for Performing Arts under the culture ministry, said his unit will start polling the question.

“The agency wants related organizations to have a voice in this. The fact that organizers of Miss America have decided to cut the swimsuit part shows they want to focus on evaluating the contestants based on their knowledge, which should be encouraged,” Minh said.

He said Vietnam does not have any regulation on banning the swimsuit competition and its continuity depends on the decision of the organizers.

Current legal documents on beauty contests do say that priority should be given to beauty of the mind, culture and other characteristics of contestants rather than their appearance.

Opinions on the bikini inclusion or exclusion will be collected for five months and a draft decree based on the feedback will be submitted to the government in November.

The Miss America competition, nearly a century old, will drop its swimsuit competition this year and will no longer judge contestants based on their physical appearance, Reuters cited top a organization official as saying on Tuesday.

“We are no longer a pageant, we are a competition. We will no longer judge our candidates on their outward physical appearance. That’s huge,” said Gretchen Carlson, chair of the Board of Trustees of the Miss America Organization.

The swimsuit competition will be replaced by a panel interview of contestants, the group said in a statement.

As for now, most readers of VnExpress, especially males, say they do not support the idea of dropping the swimsuit from the beauty contest, saying that segment is their most favorite part.

International media reports have noted that the decision of Miss America has come in the wake of the #MeToo movement against sexual harassment and assault.

Leanza Cornett, Miss America in 1993, was quoted by the Telegraph as saying that she “hated” the swimsuit competition.

“In the climate of #MeToo I think it’s a really wise decision. We’re living in a different era now, and when we move forward for the empowerment of women, we will be taken much more seriously, and I think that’s huge,” she said.

Beauty peagants are loved by the large public in Vietnam, where national media outlets treat them as major events and beauty queens are revered by some as idols.

But the event has become more controversial of late given rising awareness of gender equality, women’s rights and sexual harassment.

So, who was the Thai tycoon who died in Leicester City copter crash